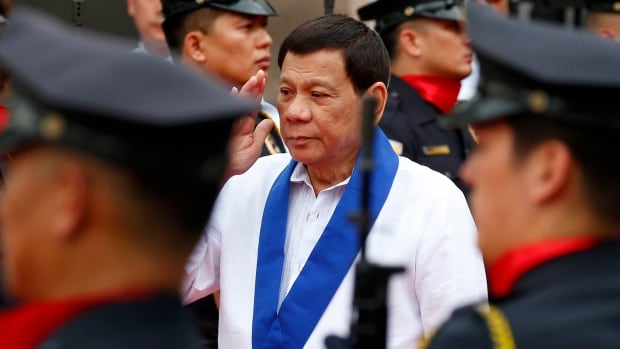 Has covered news and politics at home and abroad, reporting from dozens of countries. He has also written extensively about sports, including seven Olympic Games and a best-selling book on the business of pro-hockey.

The Philippines has inked a $233 million deal to purchase 16 combat utility helicopters from Canada for use in “internal security operations” against Maoist rebels and Islamic State allied extremists. 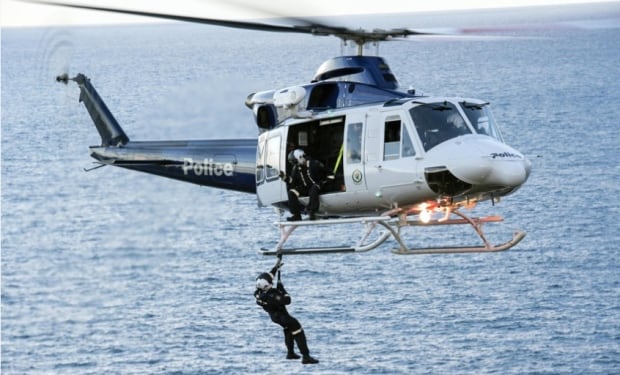 The agreement, announced this morning, will see the Bell 412EPI choppers delivered early next year as part of President Rodrigo Duterte‘s broad push to modernize his military and bring more power to bear on restive regions of the country.

The deal is sure to raise questions about the Duterte’s government’s true aims, and Canada’s role in arming a regime that stands accused of widespread human rights abuses.

Last May, the Canadian-based International Coalition for Human Rights in the Philippines (ICHRP) wrote to Foreign Affairs Chrystia Freeland to ask if eight helicopters sold in a 2014 deal with Bell were being used in air campaigns that are alleged to have targeted civilians.

Soldiers board a helicopter in June 2017 as government troops battled insurgents from the Maute group in the Marawi City region. (Romeo Ranoco/Reuters)

The strikes in Malibcong, Abra, reportedly destroyed farms and forests. The Philippine military is fighting the New People’s Army, an armed communist group in the region.

Duterte has not been particularly concerned about who gets caught in the crossfire. After NPA guerrillas killed four police last March, the president instructed his forces to “go ahead, flatten the hills,” adding, “if there’s collateral damage, pasensiya [a Tagalog word meaning ‘too bad’].”

Justin Trudeaudid raise the issue of human rights in the Philippines— most specifically a war on drugs that has seen the extrajudicial killings of thousands by police — during a face-to-face meeting with Duterte in Manila last November. The prime minister characterized the discussion as “cordial,” but that wasn’t his counterpart’s take. 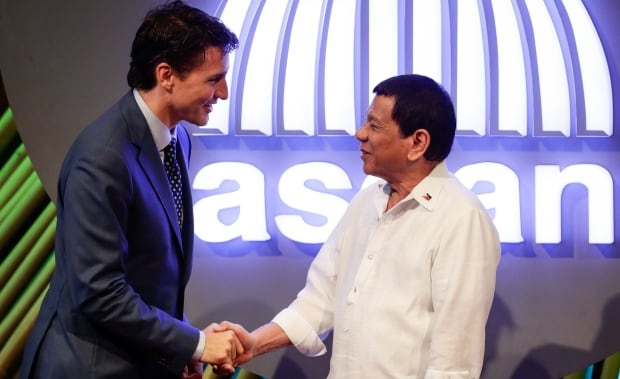 Prime Minister Justin Trudeau, left, met with Duterte before the opening ceremony of the ASEAN Summit in Manila in November 2017. (Mark R. Cristino/EPA-EFE)

“It is a personal and official insult,” the Philippines president railed at a news conference. “I only answer to the Filipino. I will not answer to any other bullshit, especially foreigners. Lay off.”

Canada’s foreign arm sales have been under scrutiny since reports last summer that the Saudi Arabian military was using armoured vehicles made in London, Ont., to quell an uprising in a minority Shia Muslim area.

That $15 billion deal was struck by Stephen Harper’s government, but approved by the Liberals shortly after they took office. Ottawa is currently defending the agreement against a Federal Court challenge on the grounds that it contravenes restrictions on exporting arms to countries with a “persistent record of serious violations of the human rights of their citizens.”

There are precedents for halting arms sales to the Philippines. In October 2016, the U.S. State Department quashed the export of 26,000 assault rifles after Ben Cardin, a senior member of the Senate, said he would oppose it over human rights concerns. 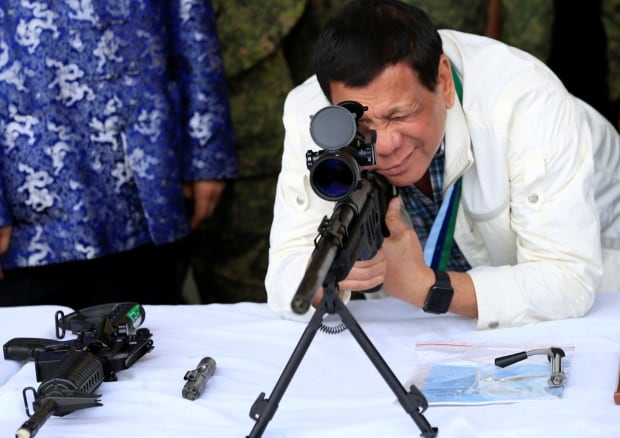 Duterte checks the scope of a 7.62mm sniper rifle. During a meeting with Prime Minister Narendra Modi in New Delhi in January, he indicated that his country may buy a large order of firearms from India. (Romeo Ranoco/Reuters)

Duterte reacted with his usual calm.

“Look at these monkeys, the 26,000 firearms we wanted to buy, they don’t want to sell,” he said in a televised speech. “Son of a bitch, we have many homemade guns here. These American fools.”

Last month, during a meeting with Prime Minister Narendra Modi in New Delhi, the Philippines president indicated that he might purchase the guns from India.

Below are the letters of ICHRP – Canada:

February 7, 2018
The Right Honourable Justin Trudeau
Prime Minister of Canada
Office of the Prime Minister
80 Wellington Street
Ottawa, ON K1A 0A2
Re: Government of Canada sale of combat helicopters to Government of the Philippines
Dear Prime Minister:
I am writing on behalf of the International Coalition for Human Rights in the Philippines (ICHRP) – Canada to express our shock and deep concern following the announcement on February 6th that the Canadian Government is facilitating the sale of military helicopters to the Philippines military.  Signing a military procurement agreement with the current regime responsible for the deaths of over 13,000 citizens defies comprehension.  We request that the Government of Canada immediately reverse its support for the agreement signed by the Canadian Commercial Corporation (CCC) and the Government of the Philippines.
The sale of the combat helicopters comes at a very dangerous time. President Rodrigo Duterte has instructed the military and police to go on an all-out war against the New People’s Army and is cracking down on activists following his cancellation of the Peace Talks with the National Democratic Front of the Philippines in November 2017. This has resulted to a new spate of killings, daily arrests of human rights defenders and intensive military operations, including aerial bombings on civilian communities.
In a letter dated March 27th, ICHRP Canada wrote a letter to Foreign Affairs Minister Chrystia Freeland raising concerns about escalating attacks and aerial bombings of indigenous and rural communities by the Armed Forces of the Philippines (AFP).  President Duterte had instructed the military Talks, to ‘drop bombs’ on rebels and consider civilian casualties as ‘collateral damage’.  At that time, we clearly stated that “we are concerned that the Philippine military could be using the Bell 412EP helicopters Canada sold in 2014 to the Philippine Army for these aerial bombings”.
ICHRP was a signatory to a follow-up letter on October 6th, this time to the Prime Minister and signed by 20 civil society organizations in Canada, which raised serious concerns about the deteriorating human rights situation in the Philippines.  The letter stated the following:
In view of the Philippine government’s apparent disregard for due process of the law and human rights standards in its conduct of the “war on drugs” and counter insurgency program, we call on the Government of Canada to:
·      suspend all sales of military and defence equipment to the Philippine government
·      investigate whether those sold previously by Canada are being used in military
operations resulting in harm and
displacement of communities
·      reassess all military procurement agreements between Canada and the Philippine
·      suspend all support for and cooperation with the Armed Forces of the Philippines
(AFP) and the Philippine National Police (PNP), including training, and to redirect
Canada’s assistance towards strengthening the capacity of human rights defenders
and organizations.
The Philippines military has been quoted in the Canadian press stating, “The helicopters will be used for the military’s internal security operations.”  It has been these so-called internal security operations that have been used to falsely justify systematic and escalating violence against communities and human rights defenders over the past few years.  While exact figures are difficult to ascertain, the number of killings and arrests is rising sharply. Philippine sources have reported up to 13,000 small-time drug dealers and addicts killed during Duterte’s “war on drugs,” while the reputable human rights group, Karapatan, has documented 126 victims of political killings and 272 illegal arrest and detention of activists. Military counter-insurgency operations that include aerial bombings have resulted to the displacement of 426,590, mostly from farming and indigenous communities.
Without safeguards and measures in place to assess the human rights impact of this procurement agreement, we have reason to believe the Government of Canada is placing itself in a contradictory position. On the one hand the Government of Canada is providing development assistance to promote democracy, human rights, and women’s rights in the Philippines, while on the other hand promoting military activity that will undermine these very same rights.  Furthermore, given the information at the government’s disposal regarding the escalating human rights violations in the Philippines, the recent agreement signed by the CCC could render the Canadian Government complicit in grave human rights violations under the current regime.
We call on the Government of Canada to immediately reverse its support for this agreement and to direct the Canadian Commercial Corporation (CCC) accordingly.
Sincerely,
(Ms.) Bern Jagunos  (on behalf of the ICHRP – Canada)
c.c.:      Philippine Embassy in Canada; Embassy of Canada in the Philippines; Minister of Foreign Affairs; Minister of Defence; Opposition Foreign Affairs Critics; Opposition Defence Critics; Deputy Director Philippines Program GAC
***

Re:  Military bombings on civilian communities in the Philippines and potential Canadian connection

I am writing on behalf of the International Coalition on Human Rights in the Philippines – Canada to bring to your attention our concerns over military attacks on civilian targets in recent weeks and the potential connection to Canada.

Over the past two weeks, the Armed Forces of the Philippines (AFP) have been conducting a number of aerial strikes on indigenous and rural communities. The escalation of military aerial bombardment on civilians follows the decision of President Duterte on February 6, 2016 to call off the Peace Talks between the Government of the Philippines (GRP) and the National Democratic Front (NDFP). On March 9, the President instructed the military to ‘drop bombs’ on rebels and consider civilian casualties as ‘collateral damage’.  We are concerned that the Philippine military could be using the Bell 412EP helicopters Canada sold in 2014 to the Philippine Army for these aerial bombings.

While there are no reports of civilian deaths caused by the military bombings, they have sown terror among the villagers and caused immense suffering.  Close to 650 families had been forcibly evacuated by these military bombings. In one case, the evacuees included 200 children. The bombings in Malibcong, Abra caused forest fires and burned rice fields.

When the Canadian government announced the sale of the 8 Bell 412EP helicopters to the Philippine Army  in 2014, we raised our concerns to the government and parliamentarians that the helicopters might be used against civilian communities in military operations such as what are now taking place.

Our concern that the Canadian helicopters might be used in such bombings sprung from reports by human rights organizations and Philippine newspapers about aerial bombings conducted by the Philippine military during counter-insurgency operations against the New People’s Army resulting to the deaths and injuries of civilians, damage to their properties and crops and their forced evacuation.

Officials of the Department of Foreign Affairs assured us in 2014 that Canada’s military export control guidelines were followed in the sale of the Bell 412 helicopters. Additionally, we’ve learned that another Canadian company, Calgary-based Eagle Copters Ltd, had been involved in another helicopter deal to the Philippines.

We look forward to hearing from the Minister’s office about this troubling issue and about measures being taken to ensure that Canada is not implicated in operations by the Philippine military against civilian communities through its sales of military goods and other defense-related interests.