The National Union of Peoples’ Lawyers is deeply humbled by the honor of being the first “Human Rights Defender of the Year” given by the Belgian campaign alliance Stop the Killings.

How timely is it to receive this award on 10 December 2013, the 65th anniversary of the UN Universal Declaration on Human Rights, a day we marked in the Philippines with crucial protests across the country.

The sorry state of human rights and the continuing impunity in the country was a focal point at the recently-concluded NUPL Third National Congress, where human rights lawyers were nonetheless reinvigorated by the theme to “Consolidate our Ranks to Defend, Protect and Advance the People’s Rights: Resist the State’s Various Schemes to Violate Human Rights.”

We honestly did not imagine that doing what we think was a matter of course – serving the people through the use of our legal skills, training, education and experience – in the defense, protection and promotion of human rights in all aspects – would warrant such touching honor internationally.

We express our sincerest gratitude not only to those who voted for us and the jury of trade unionists, journalists and representatives of non-government organizations but also to all those individuals and organizations that have consistently believed and supported us in our common goal to stop the killings and the impunity.

This award is a challenge for us to carry on and persevere more to stand by the rights of the Filipino people and all struggling peoples of the world.

On behalf of each of the 536 members made up of 325 lawyers, 128 law students and 63 paralegals in 21 chapters, 4 regional consultative bodies and 6 ad hoc bodies all over the Philippines – and most especially for and in the name of our clients – the poor, oppressed and persecuted in Philippine society – we wholeheartedly accept this humbling recognition from the Stop the Killings Human Rights Awards. 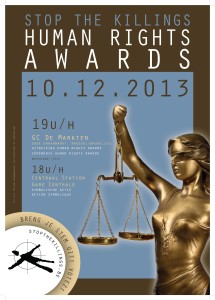 Stop the Killings is a campaign alliance based in Belgium composed of workers’ groups, cause-oriented groups, and other non-government organizations (NGOs). Their website is www.stopthekillings.be.

The awarding ceremony was held at De Markten, Brussels, Belgium on December 10, 2013, 7pm GMT+1. Dr. Angie Gonzales of the International Coalition for Human Rights in the Philippines, and Joke Dereymaeker of the Progress Lawyers Network of Belgium, a guest speaker at the NUPL Third National Congress in Bacolod City, received the award in behalf of NUPL.

Other nominees for the award were Yolanda Oquelí (a human rights activist in Guatemala), the mass movement for peace in Colombia, and Ello Mobile from Belgium. There were two rounds of voting: 450 people registered their choice in a public vote, then a jury of trade unionists, journalists and representatives of NGOs made the final decision.