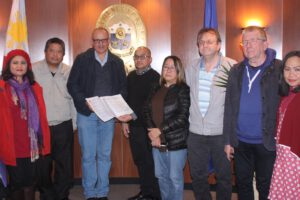 Letters addressed to President Duterte and statements condemning the immigration detention, the continuing threat of deportation and calling on President Duterte to intervene to cancel the blacklist order against Prof. Boehringer were presented to the Consulate representative. The representative stressed that it is up to the Bureau of Immigration in the Philippines to allow or deny a person entry to the Philippines even if they had been issued visa by the Consulate.

The letters signed by Peter Murphy, Chairperson of ICHRP’s Global Council and Secretary of the Philippines Australia Union Link pointed out that Duterte is “creating a pattern of deporting aged Australians who witness the harsh social and economic situation in the Philippines, even though the government itself recognised these problems and promised to address them. This does you no credit. This is damaging the relationship between our two countries.”

In its statement APDP stressed that “if President Duterte and his regime were upholding the dignity and rights of the Filipino people, they would welcome any interest in the human rights situation in the Philippines. Australian missionary Sr. Patricia Fox and Prof. Boehringer are true friends of the Filipino people who uphold the dignity and rights of Filipinos, amid overcoming poverty, injustice and violations of human rights.”

“The Philippine Bureau of Immigration’s decision to prevent Prof. Boehringer from entering the Philippines has instead brought massive media attention and internationalised further the issues that are close to Prof. Boehringer’s heart – the Lumad, extrajudicial killings, the continuing human right violations, the injustices and exploitation of Filipino people and its resources. The news is all over Australia,” Peter Brock of APDP told the Consulate representative.

Meanwhile, Migrante Australia said in its statement that “the heartless and gutless action to deny Prof. Boehringer to be with his Filipina wife as no different from President Duterte’s treatment of migrant workers who are forced to be separated their families in order to secure a brighter future for them. Blacklisting and deporting Prof. Boehringer also means that he will no longer have the facility to visit and spend quality time with his wife whenever he wants to. Duterte is tearing another family apart! How cruel is that!”

The group staged a snap action in front of the Consulate whilst bearing placards with the following calls: