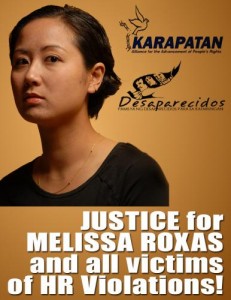 It has been nearly two years since the Commission on Human Rights of the Philippines (CHR) started their investigation into my case of abduction and torture. They have finally come out with a resolution but one that is filled with misleading and inconsistent conclusions. Not only is it a far cry from the justice that I am seeking, but by practically absolving the Armed Forces of the Philippines of accountability, and instead give the unsubstantiated claim that the New People’s Army (NPA) was responsible, the CHR is in effect complicit with the effort of the military to cover up my abduction and torture.

At great risk to my safety, I returned to the Philippines in July of 2009, to testify about my abduction and torture before the CHR, the Court of Appeals, and the Lower House of Congress’ Committee on Human Rights . I did this because I believed it was important to bring the perpetrators, the Armed Forces of the Philippines, to justice.

As a victim of enforced disappearance and torture, for the CHR to say that what I suffered through was not torture is simply reprehensible. If the CHR purports to exist in order to protect and to investigate human rights violations, using narrow definitions and making distinctions between what is “cruel, inhuman or degrading treatment or punishment” and what is “torture” is disturbing. It does no good in obtaining real justice for victims of human rights violations. “Cruel, inhuman or degrading treatment or punishment” is torture. By any definition, what I went through at the hands of the AFP was torture.

The CHR Resolution has incorrectly concluded that there is “insufficient evidence to pinpoint individual members of the AFP as responsible or probable perpetrators” of my abduction and torture. They go on to say that they have received “credible” information that indicate that the NPA was responsible. These conclusions are inconsistent with my testimony and presented evidence that point to the AFP as the perpetrators of my abduction and torture. It also deviates from the original leads and investigations the former CHR Chair, Leila De Lima initiated.

The CHR did not present any evidence or detail to support the claim that the NPA is responsible for my abduction and torture. The CHR did not give details as to what standard was used to verify the credibility of the informant who claims this was done by the NPA. Neither does the CHR offer any rigorous review of evidence and process of investigation to substantiate this claim.

There is a lack of due process for the CHR to come up with this conclusion. By doing this, the CHR Resolution makes it obvious that it wants to distract the investigation away from the AFP as being the real perpetrators.

In its recommendations, the CHR says it has now fulfilled its constitutional mandate and left in charge State parties–the Philippine National Police (PNP) and the National Bureau of Investigation (NBI)–with the responsibility of further investigating my case. This is nothing else but cruel for the CHR to expect that I would obtain justice by putting in charge these state agents—the PNP being one of the respondents to my case in the courts. I suffered trauma and injuries from the abduction and torture by State agents. What kind of justice do I expect to get if the very institutions that are responsible for my abduction and torture are left to investigate my case?

The CHR has certainly not fulfilled its duty to protect my human rights. This resolution only serves to maintain and perpetuate impunity for the Philippine government and military who commit these heinous crimes.

Justice to the Victims of the New Bataan 5 Massacre!