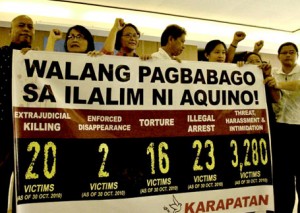 Karapatan Public Info Desk, Media Release, April 18, 2012 –   Karapatan expressed outrage over the successive arrests of Renante Gamara, a consultant of the National Democratic Front (NDF) and Alex Arias, a leader of peasant group PUMALAG, in Southern Tagalog. Both are now detained on charges of kidnapping and double murder. Gamara was arrested by the Criminal Investigation and Detection Group (CIDG) on April 3 and, after four days, on April 7, Arias was abducted and surfaced by the 1st Infantry Battalion-Philippine Army after six days of captivity.

Cristina Palabay, Karapatan spokesperson said that, “the two were arrested and detained on the basis of an amended warrant of arrest which lists 36 aliases without any distinguishing descriptions for each of the aliases written. Anyone could be arrested on trumped up charges when you have a warrant of arrest such as the one used to arrest Gamara and Arias.”

She pointed out that the original warrant of arrest that was issued on February 25, 2011 did not have the name of Renante Gamara but only a certain “Ka Mike”. “In the amended warrant of arrest issued last March 23, 2012, that certain ‘Ka Mike” became “Ka Mike  Gamara/Renante Gamara. It’s sheer abuse of authority. Anybody could be apprehended and detained by simply attaching an activist’s name on one of the aliases written on the warrant of arrest,” said Palabay.

Alex Arias’ name on the other hand was included in the original warrant of arrest along with another detained NDF consultant, Tirso Alcantara. Arias is a National Council member of the Kilusang Magbubukid ng Pilipinas.

“Human rights workers and lawyers have long protested the practice of issuing warrants with aliases or John/Jane Doe’s. In fact, the Department of Justice already issued Circular No. 50 in October 1999 stating that appropriate description must accompany a particular John/Jane Doe to distinguish one from the other. But until now, the practice continues and is abused by the government to illegally arrest and silence leaders and members of progressive organizations,” said Palabay.

Karapatan calls on the government to “stop arbitrary and illegal arrests and detention and the practice of criminalizing political offenses to cover up political persecution,” concluded Palabay.