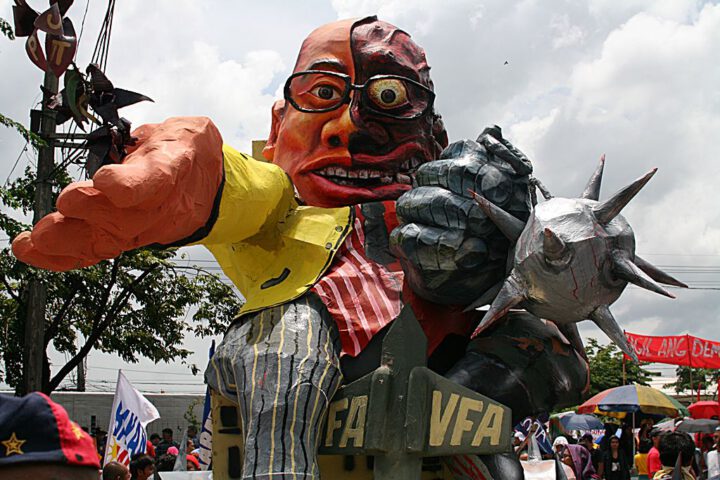 Cristina Palabay, spokesperson of Karapatan, said that, “the police brutality that was used against the demonstrators and Aquino’s deafening silence on the increasing number of extrajudicial killings and intensifying military operations that continue to attack the people in the countryside and the reign of impunity provided the real picture of the state of human rights in the country.”

Palabay hits the authorities’ acts to prevent the demonstrators to go near the Batasan area, saying that it was in fact the authorities who violated Section 6 B of Batas Pambansa 880 stating that the “mayor or any official acting in his behalf shall act on the application within two (2) working days from the date the application was filed, failing which, the permit shall be deemed granted.”

Palabay explained that “the reaction of some of the protesters on the attempts of the police to block their peaceful march is out of frustration and anger over the arrogance and aggressive stance of the police and Noynoy’s SONA of lies on the real situation of the Filipino people. In the first place, this would have not happened had the authorities allowed the demonstrators to go near Batasan and had they not use their vehicles as a barricade against the people’s march.”

“On the one hand, there was police violence against the street demonstrators, majority of them were urban poor dwellers, jobless workers, landless peasants and victims of military operations in the countryside. On the other hand, there was Noynoy Aquino, inside the House of Representatives who painted a dream-like picture of the Philippines—glossy and overly decorated. Aquino’s SONA was simply crass.”

Karapatan asserts that Noynoy, “expectedly, would not dare thread on the issue of human rights because he will only expose himself as today’s number one human rights violator. His Oplan Bayanihan goes full swing as he greases the military machinery with all the favours he enumerated in his SONA.” ###