No improvement of GPH human rights record under Noynoy – Karapatan 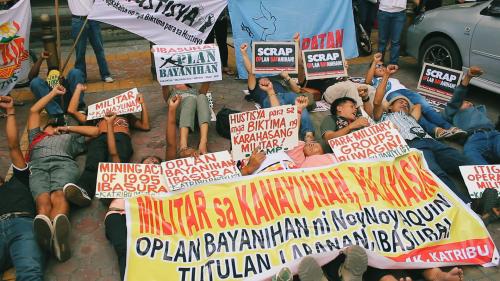 MEDIA RELEASE | May 4, 2012 –   Human rights group Karapatan today belied the statement of Dept. of Foreign Affairs (DFA) Secretary Albert del Rosario who said that the “significant decline of extrajudicial killings in the country,” is the result of the actions taken by the Philippine government “to improve the human rights situation in the country.”

Del Rosario made the statement during his lecture in Washington Wednesday, as he urged the United States government to take out “improved human rights record” as a condition for increased military aid to the Philippines.

Cristina Palabay, spokesperson of Karapatan, said that “if del Rosario considers the 76 victims of extrajudicial killings as an indication of a better human rights environment, he must be either deluded or simply covering up the inadequacies and liability of the government to stop and resolve the many cases of human rights violations under Aquino’s watch.”

Karapatan cited the case of Aklan municipal councilor Fernando Baldomero, the first incident of extrajudicial killing under Aquino, as among the many unresolved cases. It has been almost two years since the killing but the case filed by Baldomero’s relatives is currently archived at the Aklan Regional Trial Court, with the perpetrators still scot-free.

The high-profile case of Italian missionary Fr. Fausto “Pops” Tentorio has also yet to be resolved as the masterminds of the killing on October 16, 2011 have not been arrested.

Through an interrogation at the Italian Chamber of Deputies in April 19, Italian parliamentarians Leoluca Orlando and Fabio Evangelisti said that the “murder of Father Tentorio is clearly a demonstration of the continuing culture of impunity and injustice in the Philippines.” (copy of interrogation in Italian and its translation attached)

“Since Aquino assumed the presidency in July 2010, there have 76 cases of extrajudicial killings documented but none have been prosecuted. The killings stemmed from the implementation of the counter-insurgency program of the government called Oplan Bayanihan. The state security forces are deployed in rural areas and in urban areas to neutralize the unarmed civilians considered members or sympathetic to the guerrilla New People’s Army (NPA),” they said.

The Italian parliamentarians also sought the answer of the Chairman of the Council of Ministers and the Minister of Foreign Affairs on “what action the (Italian) Government considers diplomatic with the Philippine Government to end militarization, and particularly the operation Oplan Bayanihan, and extrajudicial killings in the Philippines.”

“The issuance of warrants of arrests against known human rights violators such as Maj. Gen. Jovito Palparan Jr. and Governor Joel Reyes are borne out of the perseverance and unwavering search for justice of the victims’ relatives. The government should exercise delicadeza in claiming it as their “achievement” out of respect to the relatives, because this government has done nothing to go after the  perpetrators of human rights violations,” Palabay commented.

“The Aquino administration resorts to proliferation of lies and in offering a wider expanse of our territories for increased access and military operations of the US in the Philippines and in Asia, in exchange for greater military aid. Such acts are nothing more than blatant display of mendicancy and puppetry,” Palabay concluded. ###