KIDAPAWAN CITY – People from all walks of life — Christians, lumads, activists, among others — demanded justice as they accompanied slain Italian priest Father Fausto Tentorio on Tuesday to his final resting place in Arakan, a hinterland town in North Cotabato. 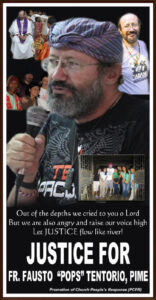 Tentorio was shot dead by an unidentified gunman inside the church compound in Arakan town on October 17.

He was buried at the cemetery at the Bishop’s Palace near the grave of another Italian priest, Father Tullio Favali, who was murdered in the 1980s, also in North Cotabato.

Both priests are members of the Pontificio Instituto Missioni Estere (PIME or Pontifical Institute for Foreign Missions).

Aside from the two priests, another PIME priest was also murdered in Mindanao, Father Salvatore Carzedda who was killed in Zamboanga City in 1992.

The PIME Fathers have been serving remote communities in the Philippines since 1968.

Tentorio, 59, said to be a staunch anti-mining advocate, has been serving in the Philippines since 1978, a year after he was ordained to the priesthood.

On Tuesday morning, a funeral procession was held for Tentorio after the Requiem Mass presided over by Kidapawan Diocese Bishop Romulo dela Cruz, PIME missionaries, and other priests.

The bishop noted that Tentorio started his missionary work in North Cotabato just months after Favali was killed in 1985 by a para-military assassin in Tulunan town.

Meanwhile, activists from different provinces in Mindanao also held a funeral march along the highway after the Mass, demanding an investigation into Tentorio’s killing.

The activists also asked the government for the immediate pullout of military troops in Arakan town and other areas in North Cotabato in Mindanao, where several clashes between soldiers and rebels happened in the last few days.

Earlier on Tuesday, Catholic bishops urged the Aquino administration to probe his death and solve the case as soon as possible.

The Catholic Bishops’ Conference of the Philippines (CBCP) said the government must act decisively and swiftly, and investigate thoroughly every angle of the murder.

“How long will evil men continue to plot against those who courageously protest against the sufferings of the poor and the degradation of God’s creation?” outgoing CBCP president Nereo Odchimar said in a statement, according to an article on AsiaNews.

For the latest Philippine news stories and videos, visit GMANews.TV

According to the the “Special Investigation Task Group (SITG) Fausto,” Tentorio sustained 10 gunshot wounds in different parts of his body.

A week after the killing, Chief Supt. Lester Camba, head of the SITG Fausto, said they do not have a sketch yet of the priest’s killer.

“What we have right now is the sketch of a male person who could give a lead to the killing. This person was monitored to have been looking for Father Tentorio for four times since January,” said Camba.

According to Camba, reports saying the police had already released a cartographic sketch of the priest’s killer were not true.

“I have not said that in any interview I had with any media. What I claimed was that the computerized criminal illustration we have right now was not the suspect’s sketch,” he said.

However, Camba said he is not discounting the possibility that the person in the sketch that the police might also be involved in the killing.

“What would be his reason for asking the priest’s whereabouts? Since January, the same person was looking for Father Tentorio for four times. He only asked one question: ‘Where is Father Fausto?’ After knowing that the priest was inside the chapel, he would leave the place. So that raised a doubt,” said Camba.

The STIG Fausto has at least eight witnesses — three church workers, three public school teachers, and a mother and her child.

However, these witnesses have yet to execute their affidavits so that the Police could use the documents for the eventual filing of charges against Tentorio’s killer or killers.

Lived and died among his own people

In his homily during the Requiem Mass at the Our Lady Mediatrix of All Grace Cathedral, Dela Cruz said Tentorio loved the people of Arakan where he lived, worked, and died.

“I know that even if we lost Father Fausto, we are not without hope…. I know we will also have another resurrection,” Dela Cruz said.

The bishop said Tentorio survived many attempts on his life.

In 2003, Tentorio had to seek refuge in another village in Arakan when a group of armed militia was said to be looking for him.

In 2006, later, soldiers in full battle gear allegedly raided the parish where Father Tentorio was holding a dental and medical mission.

Tentorio was allegedly accused of supporting the rebel movement and keeping in his convent a number of wounded rebels.

In his last will and testament, Tentorio said he wanted the following words to be written on his tombstone, “You’re told, oh Man, what is good… to do justice; to show mercy; and to walk humbly with my God.”

Long before he was murdered, Tentorio already prepared for the worst, telling his friends that he wanted to be buried in a coffin made out of his favorite mahogany tree, one he had planted in their convent in the 1980s.

As an ultimate act of honor, the parishioners have cut down the tree and made a coffin for Tentorio.

“This is what Father Fausto did that we considered his legacy: He showed mercy to the lumads in Arakan town. He sought justice for them when their lands were grabbed from them; when they were harassed by men in arms; when their own government seemed to abandon them,” Dela Cruz said.

During Monday’s vigil, village chieftain and tribal leader Gayotin Tomanding said Tentorio’s death was a big loss to their tribe.

“When we were bereft of assistance of the government, we sought help from Father Fausto. And he would always be there for us. He would always lend a helping hand. He would always give us food if we need to nourish our body. He would give us farm tractors if we wanted to plow our fields… When he died, part of us also died,” Tomanding said in the vernacular.

Tomanding was also in tears when he recounted how Tentorio risked his life just to protect him in the past. – (by MALU CADELINA MANAR, VVP, GMA News)