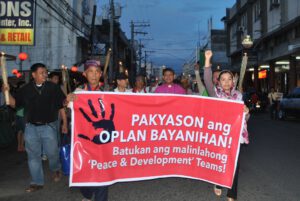 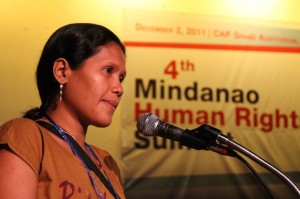 A Mamanwa woman recounted how soldiers burned her village in an operation in Kitcharao, Agusan del Norte.  A farmer from Arakan Valley, North Cotabato who is nine months pregnant told of how soldiers illegally arrested her relatives and strafed at their houses.

A lumad advocate lamented how soldiers conducting a ‘peace and development’ mission in Sarangani harassed Blaan students and teachers in a literacy school that forced it to close down.  A Moro advocate said the situation of displaced 15,000 civilians in Basilan and Zamboanga Sibugay is the effect of President Aquino’s ‘all-out justice’ crusade for the death of 19 soldiers.

Bishop Felixberto Calang, convener of Barug Katungod Mindanao that spearheaded the Summit, said that out of the more than 1,200 victims of extrajudicial killings— all unsolved— nearly 400 of these are Mindanawons.

“We come here for the fourth time, only to see human rights getting worse,” Calang said.

The annual gathering of victims, churchpeople, and human rights advocates of about 500 made sharp criticism on Aquino, especially ordering the Armed Forces of the Philippines to continue pursuing a counter-insurgency program that has worsened human rights violations.

The Summit also demanded the pull out of military troops to stop the terror in communities, and said the AFP’s Oplan Bayanihan is responsible for the atrocities.

“If the military does not distinguish between human rights defenders and their targets, we will see no end to the killings and repression of human rights,” Calang said.

Another church leader, Bishop Modesto Villasanta, said the killings happened in the presence of the AFP’s peace and development teams in the communities.  These include the killing of Fr. Fausto Tentorio in Arakan, North Cotabato and farmer Rudy Dejos in Davao del Sur, and nine-year old Sunshine Jabinez in Pantukan, Compostela Valley.

“What ‘peace and development’ is the AFP talking about? That people rest in peace?” asked Villsanta.

Bishop Calang further said that the country’s human rights record under Aquino is “more appaling compared to Gloria Arroyo’s” with 55 cases of extrajudicial killings in less than two years.

The atrocities however emboldened communities and rights advocates alike to pursue actions to protect human rights.  He said several human rights organizations are now preparing to take the Aquino government to task for this continuing impunity before the United Nations Human Rights Council which is set to review the Philippines’ human rights record next year.

He said tens of thousands from all over Mindanao are expected to pour out into the streets to demand an end to impunity on December 10, International Human Rights Day.

“Coming to this summit, defenders and survivors, the tears that you have kept are now a wellspring of courage to stop the continuing impunity in our country,” Calang said.
#