Military continues to spew “Goebbelish” claim health workers were not tortured, Pnoy must understand the subtext of command responsibility

“If you tell a lie big enough and keep repeating it, people will eventually come to believe it. The lie can be maintained only for such time as the State can shield the people from the political, economic and/or military consequences of the lie. It thus becomes vitally important for the State to use all of its powers to repress dissent, for the truth is the mortal enemy of the lie, and thus by extension, the truth is the greatest enemy of the State.” 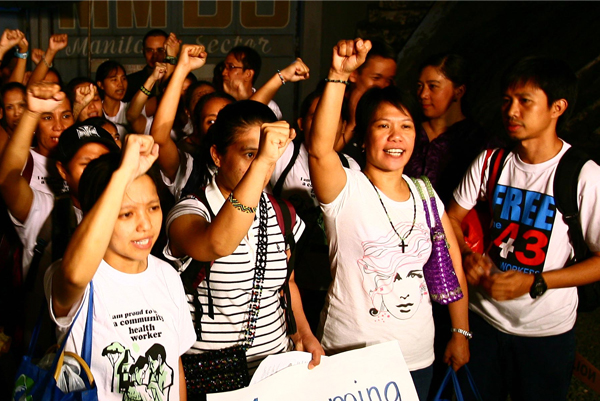 “The military continues to speak in forked tongues, “ the Panel of Private Prosecutors from the National Union of Peoples’ Lawyers (NUPL) through its Secretary General Edre Olalia observed in reaction to the claim that the Morong 43 doctors, nurses, midwives and community health workers were not tortured.

“In classic unremoulded Goebbelism, the military continues to spew ad nauseum” through Armed Forces of the Philippines Spokesperson Col. Arnulfo Burgos Jr. that the “Morong 43” health workers are NPA rebels, that they were not tortured and that their arrest was a legitimate operation . “This patently demonstrates that the military is still in denial after all these years about systematic and routinary human rights violations right under its nose, “ Olalia lamented.

“How could the people even start to trust the military when in the face of abundant evidence and incontrovertible facts to the contrary, it continues to refuse to accept reality when it declared that they were ‘just performing their duties and responsibilities,” that “it is never a policy to commit torture,” that “they have long condemned this practice in our ranks” and that they were “only executing an arrest warrant?, ” Olalia asked.

“And then it has the gall and temerity to gloat that the uniformed personnel involved in the illegal arrest, detention and torture have received “commendations and promotions, ” Olalia added. With its credibility at its lowest ebb, the “Goebellish” declaration cannot fence off the big, bold and even brave step of the health workers to tell the truth as it is seek and justice,” he said.

Olalia also asserted that the inadmissible and even spurious or simulated evidence they expect the military to present as a way of “damage control” and cover up will explode in their faces. “Pure hogwash, “ he said of the contrary claim of five of the Morong 43 who have been forcibly segregated from the rest and have been under the “care and protection” of the military since the last part of February 2010. “The evidence of torture is indubitable. There are overwhelming and credible testimonial, documentary and medical evidence to establish this,” he maintained.

The five remaining in the custody of the military, as each and every one of the Morong 43, have priorly been repeatedly subjected to vicious and intense interrogation, day and night and lasting till dawn for weeks on end, since they were illegally arrested On February 6, 2010. Unlike the rest of the 38 who stood by the truth and asserted their rights, the five apparently gave in to the clever combination of “good cop-bad cop” approach or a mix of hard and soft tactics including torture, threat and intimidation to them and their families, pressure, brainwashing, enticement of promises of rewards and a “good life”. “Before they were pestered and worked on endlessly to break their will, these five have in fact executed free and voluntary statements attesting to their ordeal before “new” lawyers not of their own choice were parachuted by the military to put a semblance of legality to such cheap stunt, “ Olalia recalled.

Finally, Olalia enjoined President Pnoy as present Commander-in Chief to “tell his army to toe the line and behave. Or is it already? The subtext of the case against GMA is that it is the first criminal complaint for human rights violations against a Philippine president….. so far. Should he neglect, ignore or even tolerate this clarion call for himself to shape up or lest he be put to task for the acts of his subordinates, he may, in time, be next,” he pointed out.

Olalia noted that there are abundant local and international laws and jurisprudence that have set the precedents on command responsibility of heads of States for acts of their subordinates through their own acts or negligence to stop, prevent or investigate – when it is within their power and authority to do so – serious and credible charges of human rights violations that they knew or were reasonably expected to know under the circumstances and by virtue of their position.#