Liguyon’s wife to go to national capital to protest killing of husband, threats against community 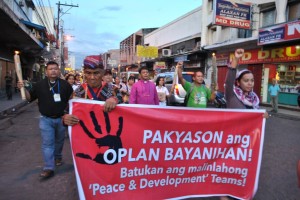 MALAYBALAY CITY – The 19 families of Human Rights Defenders remain adamant in continuing their camp-out protest at the Bukidnon Provincial Capitol grounds.  Instead of backing down from the pressure, they have stepped up their campaign, bringing the issue to both the national and international communities.

Liguyon’s wife, Sharon, is joining this month other Internally Displaced Persons from Mindanao to bring their case to Manila.  She is to lobby to the national offices of government agencies such as the Commission on Human Rights and the National Commission on Indigenous Peoples to demand for justice for Jimmy Liguyon and to ensure the security of the 19 families who have evacuated after Liguyon’s death.

Previously, on April 11 Bukidnon Vice Governor Zubiri went to the camp-out of 19 indigenous families, telling them to leave the capitol grounds and settle at a relocation site.  But the families, led by the women, explained the significance of their camp-out.

“Wala mi problema kung unsa man ang itsura sa among balay nga puy-an basta natagaan og hustisya ang pagkamatay sa among kapitan ug maprotektahan dili lang kami kundi ang uban pang mga pamilya nga ginahulga sa mga paramilitar (We don’t have a problem however our houses will look as long as we have achieved justice for our barangay captain and we have ensured the protection of not only our families but of the others who are being threatened by the paramilitaries as well.”

The evacuees are also doubtful of the assurance of security for their families in the subdivision they were to be relocated.  The following day, they saw Joas Lekawan, one of the actual members who was with Butsoy Salusad when he killed Jimmy, in front of the camp.

“Libre man gani nga mualigid ug magmatyag sa amo ang mga miyembro sa NIPAR nga naa mi sa capitolyo samot pa kaha nga naa mi sa sabdibisyon (Members of NIPAR are free to monitor us even if we are at the capitol grounds, how much more if we are already at the subdivision)?” said Marlyn.

Tribal leaders in southern Bukidnon who are recognized by the National Commission on Indigenous Peoples have also been asked by the government to negotiate with the evacuees.  Lito Gawilan, a board member of the Federation of the Manobo-Matigsalug Tribal Councils, proposed a ‘payment’ of a horse to settle the problem.

“Ang kinabuhi ni Kapitan Jimmy dili mabayran og kabayo lang (The life of barangay captain Jimmy cannot be exchanged for a horse),” said Datu Domingo.  “Ang iyang gibarugan para sa tibuok namong kabilin, para sa musunoray pa nga henerasyon.  Usa namo nga gipangayo bag-o mi makig-negotiate kanila mao ang pagdakop usa kang Butsoy ug sa NIPAR kay hangtod naa na sila, dili masulbad ang problema.  Dili man pud sila mupasalig (What he stood for is for our entire heritage, for the succeeding generations.  One of our conditions before we negotiate with them is the capture of Butsoy and NIPAR because until they are there, the problem could not be solved.  They could not assure us of that).”

Working for the defense of our land, rights & culture, KALUMBAY is a regional alliance of nine Lumad (indigenous peoples) organizations in Northern Mindanao, Philippines