Karapatan to AFP: You may fool the US government but not the Filipino people

MEDIA RELEASE | May 4, 2012 – Karapatan, through its chairperson Marie Hilao-Enriquez today chided the Armed Forces of the Philippines (AFP) saying that, “in its bid to get additional military support from the US government, the AFP shamelessly resorts to spinning yarn by claiming that ‘human rights violators in the AFP have been punished.” 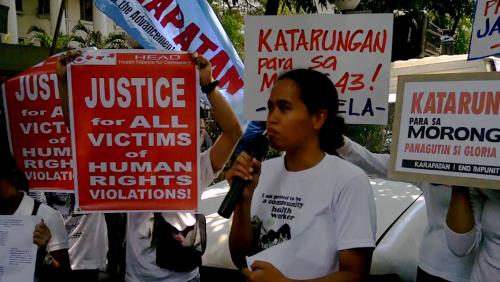 Hilao-Enriquez added that, “it is outrageous because the AFP has not lifted a finger to jail the fugitive retired general, Jovito Palparan Jr. Worse, it has promoted Lt. Gen. Jorge Segovia, Col. Aurelio Baladad, Col. Cristobal Zaragosa who were involved in the torture of the 43 health workers illegally arrested on Feb. 6, 2010.”

On May 3, eight health workers filed a criminal case at the Department of Justice (DOJ) against former President Gloria Arroyo and 13other officials of the AFP and the Philippine National Police (PNP) for violations of the Anti-Torture Act of 2009, Republic Act 7438 (Rights of Persons Arrested, Detained or under Custodial Investigation) and robbery.

Hilao-Enriquez said that the move was part of the series of the legal initiatives of victims, their relatives and human rights groups to file administrative and criminal charges against the past president and her generals to make them accountable for the thousands of rights violations committed under the past regime. “We’ve proven that  it is unlikely for Noynoy Aquino to make the first move to punish rights violators, he being at the helm of the implementation of the counter-insurgency program Oplan Bayanihan, a more deceptive plan but equally cruel and vicious as the Oplan Bantay Laya,” she added.

“The current administration has no qualms to lie through its teeth that human rights violators among the AFP ranks have been punished just to receive the US government’s doleouts for its counter-insurgency version, Oplan Bayanihan,” said Hilao-Enriquez.

Hilao-Enriquez concluded that, “all that crap about ‘respect for human rights’ and ‘peace and development’ in Oplan Bayanihan are nothing but to cover up the increasing incidents of rights violations under this administration. The US government’s supposed pro-human rights conditionality to grant the AFP such aid are likewise nothing but posturing also meant to cover up its intervention from the eyes of the international community.” #