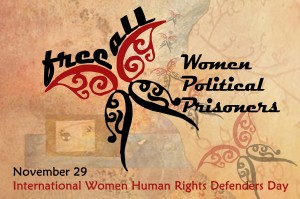 Press Statement – ON THE INTERNATIONAL DAY OF WOMEN HUMAN RIGHTS DEFENDERS – As women human rights defenders worldwide come together today, we remember our sisters in the Philippines who, like the Mirabal sisters in the Dominican Republic known as “Las Mariposas,” have exemplified the strength and courage of women who valiantly fought against the purveyors of injustices and rights violations against women and the poor people in our country. They – Sherlyn Cadapan, Karen Empeno, Benjaline Hernandez, Eden Marcellana, Connie Brizuela, Juvy Magsino, among many others – deserve our highest salute.

In remembering, our pursuit for justice for the violations against their persons becomes stronger as we hold accountable the former woman Pres. Gloria Macapagal Arroyo, who has recently tried to evade justice by attempting to depart from the country. While she is already in jail for charges on electoral fraud, we demand that she be prosecuted and jailed for the human rights violations she has brought upon WHRDs during her term.

During the Arroyo presidency, there were a total of 1,206 victims of extrajudicial, summary or arbitrary execution (EJKs for short) in the Philippines. Of the total number, 153 are women and 476 are human rights defenders (HRDs). There were 206 victims of enforced or involuntary disappearance 31 of whom are women and 68 are HRDs. Victims of illegal arrest and detention number 2,059 victims. Arroyo’s counter-insurgency policy Oplan Bantay Laya (Operation Freedom Watch), a US-inspired and promoted program, served as the blueprint for these rights violations, as human rights defenders were branded as “enemies of the state.”

The situation of Filipina human rights defenders though is no different under the current administration of Phil. Pres. Noynoy Aquino.

With its sugarcoated counter-insurgency policy Oplan Bayanihan, Aquino’s state security forces have claimed the lives of 56 victims of extrajudicial killings, four of them are women. Among them is Marlina Sumera, a journalist and an urban poor leader, who was gunned down this year because of leading her community’s struggle for land and decent housing. Sunshine Jabinez, a seven-year child, was shot dead in a militarized rural community in Mindanao (Southern Philippines).

Indigenous WHRDs in Mindanao Mayse Belayong and Bae Adelfa, whose husbands were killed by the military, are being threatened by paramilitary and now had to seek shelter from the areas where they live in. Women health workers in the Cordilleras have been repeatedly threatened and harassed by military agents and officers because of their supposed medical missions in far-flung areas.

As of October 31, 2011, there are 356 political prisoners, 77 of them were arrested under the Aquino regime. Of this number, there are 35 women political prisoners. Political prisoners are among the most critical and determined opposition of repressive regimes. They call for change and the creation of a new and better world. For this, they are considered “enemies of the state.” They are subjected to illegal arrest and detention, extreme torture and unjust conviction on trumped up charges.  Women and children, in particular, are doubly violated through sexual molestation or rape. Political prisoners, more often are charged with criminal offenses to deny the political nature of their case and to reduce them as “common criminals.”  They are charged with heinous crimes of murder, arson, robbery, kidnapping, illegal possession of firearms and explosives which are all non-bailable offenses meant to silence them and keep them incarcerated.

Among these women political prisoners are Vanessa delos Reyes, a 26 years old hors de combat, who has been in the Southern Philippines Medical Center under military custody because she has been paralyzed waist down; Moreta Alegre (Correctional Institution for Women), a 65 year old farmer, who was imprisoned together with her husband Jesus and son Selman, because of trumped up charges of murder, as they were vocal critics and campaigners against landgrabbing in their area; 21-year old Maricon Montajes (Batangas Provincial Jail), the youngest among political detainees, who was a student filmmaker from the University of the Philippines Film Institute, a member of film organization UP Sining at Lipunan and of the College Editors Guild of the Philippines, arrested in June 2010 during an immersion program with peasants in Batangas; 57-year old Gloria Floresca(Ilocos Sur Provincial Jail), a former organizer of Gabriela in La Union, who was illegally arrested recently on rebellion charges; 42-year old businesswoman Marilyn Badayos-Condes(Dumaguete City Jail), arrested June 2011 for charges of rebellion and was denied immediate medical attention when her injured arm bled during her arrest; Lumad Manobo activist JovelynTawa-ay and former student activist Lucy Canda (Correctional Institution for Women), arrested in 2006 during a military operation, held incommunicado for three days, and charged with rebellion; and 29-year old Charity Diño (Batangas Provincial Jail), a former school teacher, who was illegally arrested, tortured and detained in 2009 while she and her colleagues were inviting community residents for the activities for urban poor week.

Like butterflies who cannot survive unless they are set free, these women political prisoners and women human rights defenders nationwide are calling for their immediate and unconditional release. Thus today, we launch our postcard campaign for our sisters and friends in the international community to support this call.
References: Cristina Palabay, Tanggol Bayi (Defend Women) – Philippines Spokesperson

—
Tanggol Bayi is an association of women human rights defenders in the Philippines to advance women’s rights as human rights. Tanggol Bai is formed to further develop the capability of women human rights defenders to protect and advance women’s, human and peoples’ rights while giving special attention to the rights of WHRDs; to provide a venue by which WHRDs can give mutual assistance to one another especially to those who are facing immediate threats; provide information and facilitate HR education to WHRDs to even better sensitize them to violations of political, civil, economic, social and cultural rights; through common effort, enable WHRDs to effectively forward policies and legislations, fight for their rights and generate resources for the needs of their human rights advocacy; and network with other human rights organizations in the country and abroad.