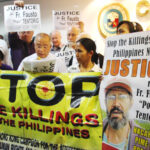 COTABATO CITY, Philippines—An Italian Catholic missionary has questioned the exclusion of the alleged masterminds from among the people charged with the murder last October 17 of fellow Italian priest Fausto Tentorio.

Fr. Peter Geremia, a colleague of Tentorio in the Pontifical Institute for Foreign Missions (PIME), said in a local radio interview Tuesday that businessman William Buenaflor  and Benjamin Rioflorido, the former chief of police in Arakan, North Cotabato, should have been charged along with confessed triggerman Jimmy Ato.

He said it was Ato who provided the names of Buenaflor and Rioflorido to investigators. Both men have denied any involvement in the killing.

Ato said in a signed confession submitted to the National Bureau of Investigation that Tentorio was ordered killed for his opposition to a hydropower plant project in Arakan that would have benefited some landowners. Ato later identified Buenaflor and Rioflorido as the alleged masterminds.

“He was the one who named the masterminds,” Geremia said.

He said Ato’s confession and his implication of Buenaflor and Rioflorido in the crime was credible because he was the confessed gunman. “But until now there was no development on his revelation,” Geremia said.

Aside from Ato, his brother Robert, Jose Sultan Sampulna and Dima Maligudan Sampulna were also charged in connection with the Tentorio killing.

Tentorio was leaving for a clergy meeting in Kidapawan City when he was shot outside his convent in Arakan.

He was the third PIME missionary killed in Mindanao since 1985, when Fr. Tulio Favali was waylaid and killed by militiamen. Norberto Manero, head of the local militia, who was convicted of the murder was pardoned by then President Gloria Macapagal Arroyo in 2010.

In 1992, Fr. Salvatorre Carzedda was also killed as he was entering the PIME regional house in Zamboanga City. No suspect has been identified in the Carzedda killing. (by Jeoffrey Maitem, Inquirer Mindanao, February 29th, 2012)