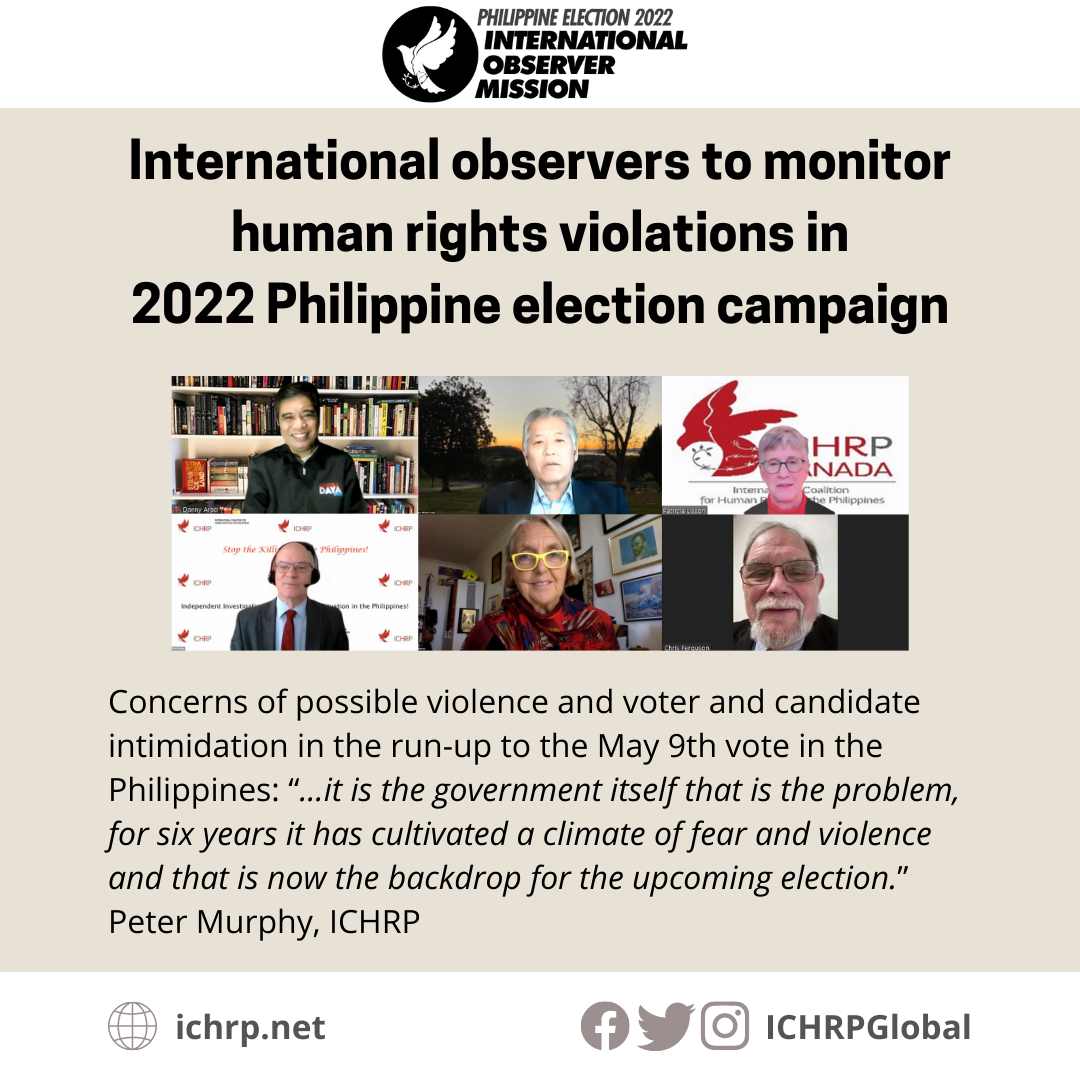 Concerns of possible violence and voter and candidate intimidation in the run-up to the May 9th vote in the Philippines: “…it is the government itself that is the problem, for six years it has cultivated a climate of fear and violence and that is now the backdrop for the upcoming election.” Peter Murphy, ICHRP

These concerns compel the international community to cast an inquiring eye on the Philippine elections to monitor the campaign, the vote and the outcome.

ICHRP has initiated the IOM in partnership with Kontra Daya, a Philippine based election watchdog.  ICHRP is a global network of organizations, concerned for human rights in the Philippines and committed to campaigning for just and lasting peace in the country.  Previous elections have witnessed high levels of violence against candidates, voters and even journalists. On the 23rd of November 2009, 32 journalists along with 26 other civilians were killed in an election-related massacre in Maguindanao, Mindanao, perpetrated by an incumbent candidate of the ruling party. It was the deadliest  incident in the history of the mass media, but it is not an isolated incident.  In the most recent elections in May 2019, at least 33 people were killed and 19 others wounded in several poll-related incidents leading up to voting day.  The victims included 18 incumbents, four candidates, three former elected officials including a member of Congress and eight civilians including a broadcaster.

According to IOM Commissioner Rev. Michael Yoshii, “the election context itself is deeply troubling. As noted last year in the reports of INVESTIGATE PH findings, “state policies including the Anti-Terrorism Act have emboldened the police and military to attack activists, peasant leaders, and Indigenous Peoples. This suggests that those charged with protecting the polls are potential perpetrators of election violence”.

The INVESTIGATE PH report provides testimony about how the Philippine National Police (PNP) and The Armed Forces of the Philippines (AFP) have been activated to conduct a war on dissenters morphing from killings in ‘anti-drug operations’ to killings of oppositionists and political opponents of the government.  These reports highlight the heightened danger of the electoral process under the Duterte presidency.

IOM Commissioner Ms Sharan Burrow of the International Trade Union Confederation said, “It is expected that the government will favour candidates who will assist Duterte in escaping culpability for the alleged crimes against humanity his government has committed in its six-year reign of terror”.

There appears to be no shortage of candidates willing to shield Duterte from prosecution.  The leading Presidential candidate Ferdinand (Bongbong) Marcos Jr, son of deposed dictator Ferdinand Marcos, has indicated “that should he be elected as president, he will not assist the investigation of the ICC in the Philippines”.  The leading candidate for vice-president is Sara Duterte, the daughter of the current President, who is also certain to try to shield her father from prosecution.

Media inquires can be sent to: