In time for the commemoration of Martial Law, political prisoners in various detention centers nationwide today started their coordinated actions to call for their immediate release through general, unconditional and omnibus amnesty for all political prisoners, while sympathy fasting and picket were conducted by families, friends and supporters of political prisoners at the gate of Camp Crame in Quezon City. 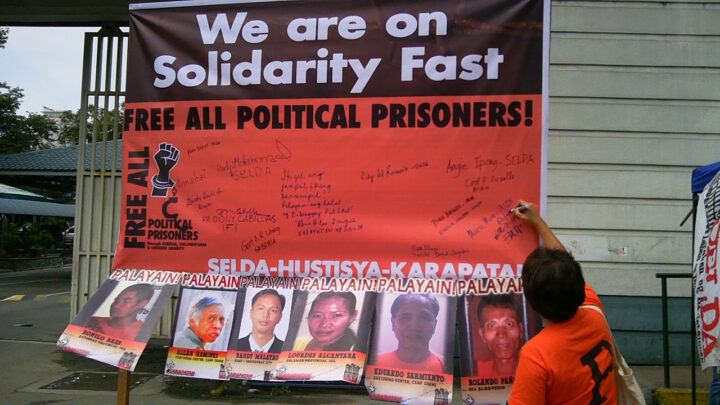 “Among the notorious legacies of the Marcos dictatorship were the illegal arrest and detention of political prisoners who fought against the corrupt and repressive regime. Such reality exists to this day, with 360 political prisoners (according to Karapatan, as of August 30, 2011) languishing in jails for fabricated and trumped-up charges against because of the exercise of their political beliefs that run counter to those of the powers running our government. In fact, there are already 77 political prisoners illegally arrested and are currently detained under the Aquino administration. Pres. Aquino should look at the mirror of history twice when he likens activist organizations to a dictatorship. His administration is actually carrying on the more vivid legacy of a dictatorship with such rights violations under his term,” commented Ipong.

The woman leader also said “that Aquino shows no compassion toward political prisoners and their families by keeping them locked up in jails and by not pursuing their immediate release.”

“We cannot fathom how the President understood the plight of his father, a former political prisoner during the Marcos dictatorship, when his administration is committing the same crimes of fascist predecessor governments. In enforcing the counter-insurgency program Oplan Bayanihan, it has unleashed the blueprint for the various human rights violations on the ground, with the strong support of the US government, the Armed Forces of the Philippines, the PNP, and agencies such as the Department of Social Welfare and Development (DSWD),” she added.

Ipong cited the cases of Rolando Pañamogan, detained at the National Bilibid Prisons, who is suffering from diabetes, deep toxic goiter and congestive heart failure, and has recently been confined at the NBP hospital due to lowered blood pressure, a complication of his diabetes, where facilities and attending medical personnel are scarce; Ernesto Dumlao, detained at the Quezon City Jail, has asthma and has been sleeping on the floor of the Quezon City Jail because he cannot pay for a “tarima” (cot) that costs P3,000; and Antonino Roda, detained at the Misamis Occidental Provincial Reformatory Jail, with severe kidney infection, urinating with blood several times already.

“A general, unconditional and omnibus amnesty for them is but a just step toward rectifying the injustices and rights violations against them,” she concluded.