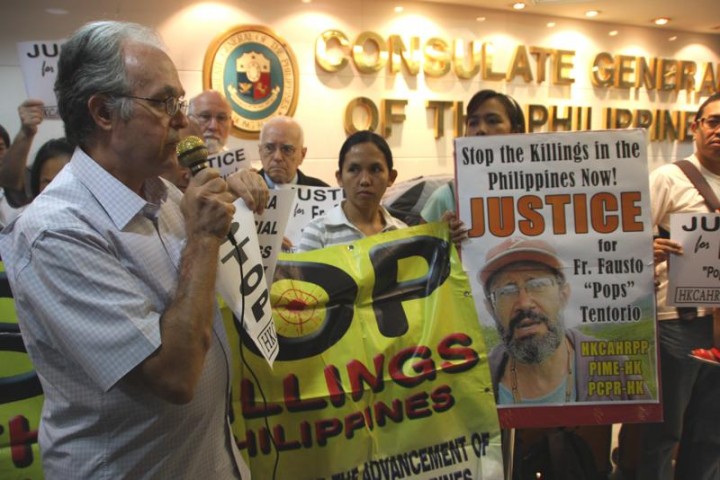 Protesters from the Promotion of Church People’s Response (PCPR) HK chapter and the HK Campaign for the Advancement of Human Rights and Peace in the Philippines (HKCAHRPP) believed that Fr. Tentorio was a victim of extrajudicial killings that was rampant during the administration of Gloria Macapagal-Arroyo and has continued in the current Aquino government.

The protesters were joined by members of Fr. Tentorio’s order, the Pontifical Institute for Foreign Missions (PIME).

“The culture of impunity persists and yet again has victimized another man of the Church whose devotion to the cause of the Lumad in Mindanao, the poor, and the Filipino people has been unflappable. Like that of all others before him, Fr. Tentorio’s death calls for immediate justice,” said Joram Calimutan of the United Church of Christ in the Philippines (UCCP) and a member of the Executive Committee of PCPR-HK.

Calimutan said that Fr. Tentorio was the 56th victim of extrajudicial killings in the Philippines.

Bruce Van Voorhis of the HKCAHRPP, meanwhile, said that human rights activists in Hong Kong who are supportive of the human rights and peace struggles in the Philippines are alarmed by the rising cases of political killings in the country.

“The body count is again on the rise. While the more than 1,000 cases of extrajudicial killings and enforced disappearance under the GMA government still await justice, the Aquino government seems more intent in adding more atrocities and human rights violations instead of delivering justice and ending the culture of impunity in the country,” he remarked. “Moreover, this is sadly occurring under a president whose father was killed in very similar circumstances to the assassination of Fr. Tentorio and countless others”, he added.

Van Voorhis said that the repackaged Oplan Bantay-Laya of the previous administration, now called Oplan Bayanihan, “clearly appears to head in the same direction as its predecessor – killings, enforced disappearances, the displacement of militarized people, and fading hopes for a just peace.”

The protesters handed in a letter signed by 19 church leaders, churches and church-related groups expressing their condemnation of the killing of Fr. Tentorio and other activists. Local and migrant workers’ organisations and a Hong Kong legislator also endorsed the statement.

“We are in solidarity with our brothers and sisters in the Philippines who continue to live in a climate of terror, of poverty, and of injustice. The killings should stop and justice should rein,” Calimutan concluded.

We leaders and members of churches, various church-related groups and organizations in Hong Kong express our indignation of the brutal death of Fr. Fausto Tentorio of the Pontifical Institute of Foreign Mission (PIME) on October 17, 2011, in the Arakan Valley, North Cotabato, Philippines.

We leaders and members of churches, various church-related groups and organizations in Hong Kong express our indignation of the brutal death of Fr. Fausto Tentorio of the Pontifical Institute of Foreign Mission (PIME) on October 17,2011 in Arakan Valley, North Cotabato, Philippines.

Fr. Tentorio, an Italian PIME priest and member of the RMP (Rural Missionaries of the Philippines), braved the threats to his life and lived and served our indigenous brothers and sisters according to the light that God had given him to see. He was instrumental in the formation of the TINANANON-KULAMANON LUMADNONG PANAGHIUSA (TIKULPA) to empower the indigenous people in his parish to protect their land, livelihood and liberty.

Together with our brothers and sisters in the Philippines and all over the world, we join the call for justice to Fr. Tentorio and the other leaders of indigenous communities, including Rebenio Sungit of the Pelaw tribe gunned down last September 5, 2011, and Ramon Batoy also of Arakan Valley, killed on 20 October, a mere three days after Fr. Tentorio. They valiantly fought for the rights of the indigenous people to their ancestral domain and campaigned against aggressive mining destroying the environment on which indigenous people depend for their livelihood and way of life and in which their spirituality is rooted.

We therefore join the call to:

–    Demand an immediate and thorough investigation of the death of Fr. Tentorio, Rebenio Sungit and Ramon Batoy and to bring before the bar of justice the assailants believed to be paramilitary groups; and to end the climate of impunity by rendering justice to Fr. Tentorio and all victims of extrajudicial killings in the Philippines and to immediately investigate, put to trial and punish the perpetrators of these human rights violations;

–    Demand an investigation into the connection of ‘Oplan Bayanihan’, the counterinsurgency program of the Aquino government, with that of former President Gloria Macapagal-Arroyo’s failed ‘Oplan Bantay Laya’ that left 1,206 victims of extrajudicial killings, 206 cases of forced disappearances as well as thousands of cases of other human rights violations;

–    Scrap the Mining Act of 2005 and cancel mining permits for large foreign mining firms that have been encroaching on the ancestral domain of indigenous people, affecting their livelihood and destroying the environment.

We offer our prayers for justice for Fr. Tentorio. He will forever be remembered and celebrated by those whose lives he touched and changed, especially the Lumads (indigenous people) and other marginalized people for whom he devoted his life and ministry as God’s faithful servant.