Salvaged Italian priest Father Fausto Tenorio had been very vocal in protests against two mining projects that would dislocate Manobos in Arakan Valley, North Cotabato and B’laans in Tampakan, South Cotabato. Prime suspect in the murder, according to news reports, are paramilitary forces. 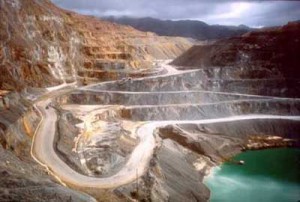 A barrage of Church protests was led by Marbel Bishop Dinualdo Guttierez, who said, “The government should no longer allow mining like this. I don’t know if they (mining firms) are hiring killers or whatever, but I am worried that one of us would get killed again.”

Mary Manazanan of the Association of Major Religious Superiors of the Philippines (AMRSP) said over Radio Veritas, “The killing … should signal him (Noynoy) to declare a stop on foreign mining in the country.” She cites many similar salvagings of Church workers and journalists where investigations had not yielded any results.

The National Council of Churches in the Philippines (NCCP), a coalition of non-Catholic Christian sects, issued a statement which read, “It is not unknown that Father Tentorio spoke against military presence (in tribal villages and). He (Fr. Tentorio) spoke loudly that the state’s security forces have become the tool for people’s insecurity.”

The proposed Tampakan mine that Fr. Tentorio is protesting against is the largest mining project in the country today, and one of the largest worldwide, a mind-boggling 10,000 hectares, covering four provinces (South Cotabato, Sultan Kudarat, Davao del Sur, and Saranggani) in two Regions, XI and XII. It is a project of the Swiss-British multinational Xstrata in partnership with the local Sagittarius Mining Inc. (SMI). The project has a history of human rights violations, including a tribal protestor shot by a security guard of the mining firm at point blank range, according to interviewed residents.

The proposed tailings dams, the largest in Philippine history, making the infamous Marcopper dam in Marinduque look like a kiddie pool affair, sits at the highest peak. If they burst, toxic wastes would threaten 6 rivers and more than 100,000 hectares of rich agricultural land, at the very heart of Mindanao’s bread basket.

The alleged $6 million dollars the government will earn from the 25-year permit will be dwarfed ten fold by the cost of massive agricultural dislocation in four bread basket provinces in case the dams break. Xstrata hopes to extract 375,000 tons of copper and 360,000 tons of gold per year for the first 17 years of operations. The bulk of this windfall would be expatriated. The government’s $6 million would be a trickle, at such high social and economic cost to its own people.

Xstrata gave the assurance that their dams will be built at state-of-the-art global safety standards. Thirty three such ‘accident proof’ dams have burst worldwide, 16 of them in the U.S. In the Philippines, we also have a good track record of broken dams. Earthquake data reveals that the Xstrata tailings dam sits right underneath a fault. Mining firms build dams as permanent structures, but ironically they are not. In time, they succumbed to old age and die, often years after the mining firms have raked huge profits and left. One day, when everyone is asleep, the killer dam strikes, a deluge of toxic wastes cascading down productive valleys nurturing communities since pre-history, rendering them irreversibly and permanently beyond rehabilitation. Such was the case at the Stave Valley Killer Dam in Northern Italy.

Xstrata came up with a 3,000-page Environmental Impact Assessment, allegedly costing a staggering $75 million. In spite of such costs and details, Clive Wicks, environment consultant for the (International Union for the Conservation of Nature.) (IUCN), an international green organization, said the EIA was flawed, having excluded affected downstream communities as stakeholders. Wicks quotes the very EIA where engineers have warned of the grave risks of the dams.

In spite of these warnings and the fact that there is an existing Provincial ban on open-pit mining, Xstrata is not fazed, confident of its powerful influence to either skirt around the law or have it amended. Indeed, Xstrata’s influence on government is hinted by the fact that the Supreme Court reversed an earlier decision saying that Xstrata’s contract with the government, the Financial and Technical Assistance Agreement (FTAA) was unconstitutional.

Xstrata has succeeded in splintering the Lumad communities in the mine site. Those directly affected at the top of the hill refuse to be bought by Xstrata sweeteners, such as temporary employment and social benefits. Those at the bottom of the hill have embraced Xstrata, appointing their own chieftains and organizing ‘pseudo-tribal organizations’ as visible fronts of the mining project.

The project is scheduled to have its Environment Compliance Certificate (ECC) approved by early 2012, the go signal for the plant to be built, which would hopefully be operational by 2016. It is not too late for Noynoy to intervene in behalf of millions of affected communities in four provinces to scrap the project completely, and pre-empt this largest every potential environment disaster. The Philippine Misereor Partnership, Inc. (PMP), in a press statement, is requesting Noynoy “to reconsider its recent decision of backing the formation and deployment of militias to beef up security for mining operations.” Jaybee Garganera of Alyansa Tigil Mina accused the Department of Environment and Natural Resources (DENR) of ‘washing hands’ in the affair, with Secretary Ramon Paje said, “We are harmonizing local and national policies toward a more friendly regime for the mining industry.” How about being more friendly to our very own indigenous communities.#