Los Angeles, CA– Filipino human rights defenders representing the JustPeacePH Peace Tour 2017, were warmly received on April 27 at a dinner and forum opening up the Southern California-leg of their nationwide tour. The tour aims to increase support for the peace talks between the National Democratic Front of the Philippines (NDFP) and the Government of the Republic of the Philippines (GRP), which aim to bring about a just and lasting peace for the Filipino people.

The venue at Rosewood United Methodist Church-with a largely Filipino immigrant congregation in the East Hollywood neighborhood of Los Angeles served as the backdrop for a sharing of the struggle for peace as a long-running civil war continues in the Philippines. Edre Olalia, Legal Consultant of the Peace Negotiating Panel of NDFP, explained, “There are peace negotiations because there is an ongoing armed conflict. There is an armed conflict because of the exploitation and oppression, that’s why there is no development.”

The rapid increase in human rights violations has brought growing international attention towards the Philippines in the wake of the “war on drugs” encouraged by GRP President Rodrigo Duterte and carried out by the Philippine National Police, Philippine Army, and its other militias. 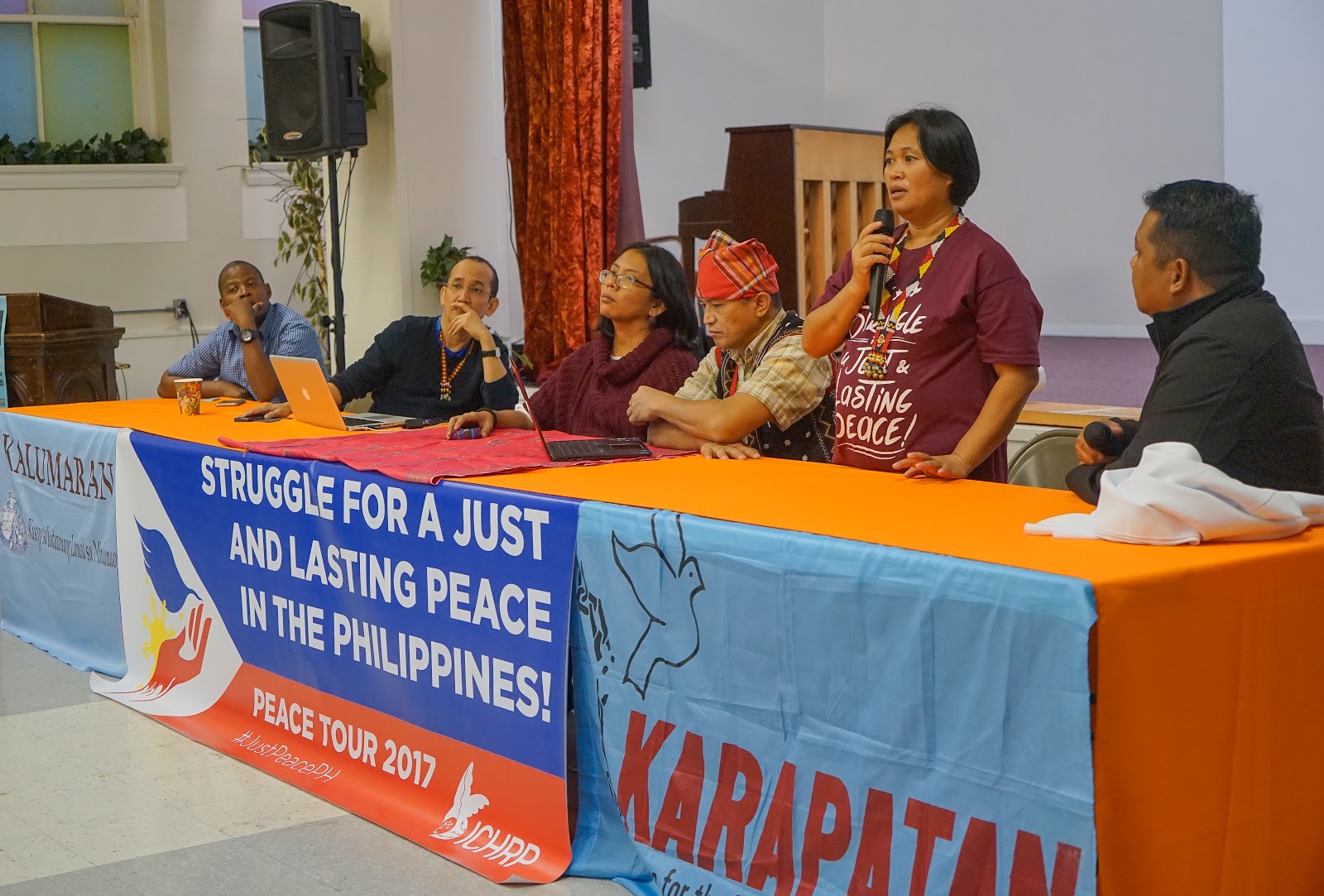 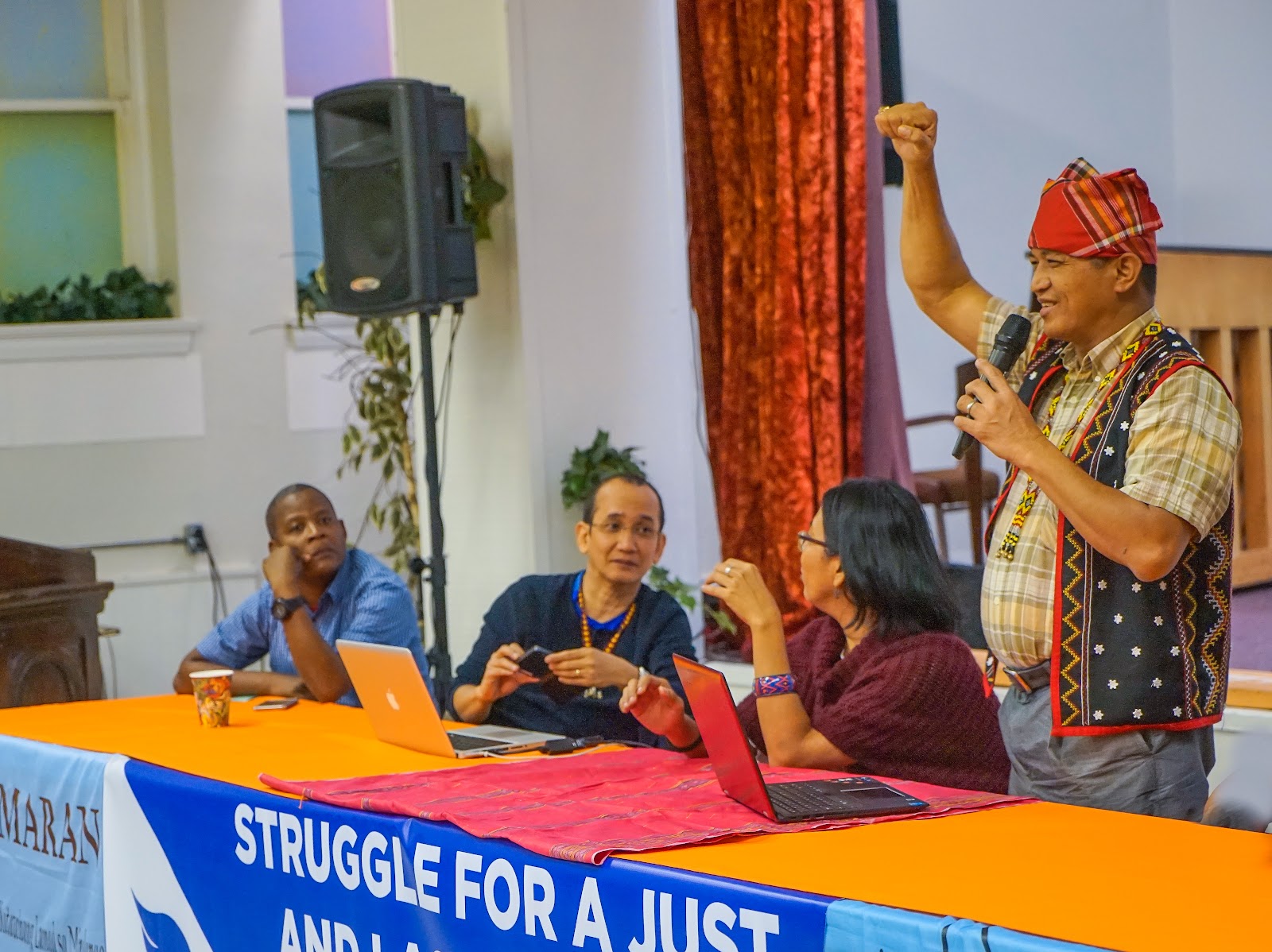 Jo Pagalan, one of the representatives from the indigenous Filipino (Lumad) tribes reported, “the CARAGA (northeartern Mindanao) region was declared a mining capital where 12 army battalions are deployed.” This “is used by the government to suppress and silence the Filipino people, not only indigenous people,” added Dulphing Ogan. They decry the GRP’s complicity in violating laws that ban the encroachment on indigenous lands, particularly by investment ventures interested in the natural resources there. 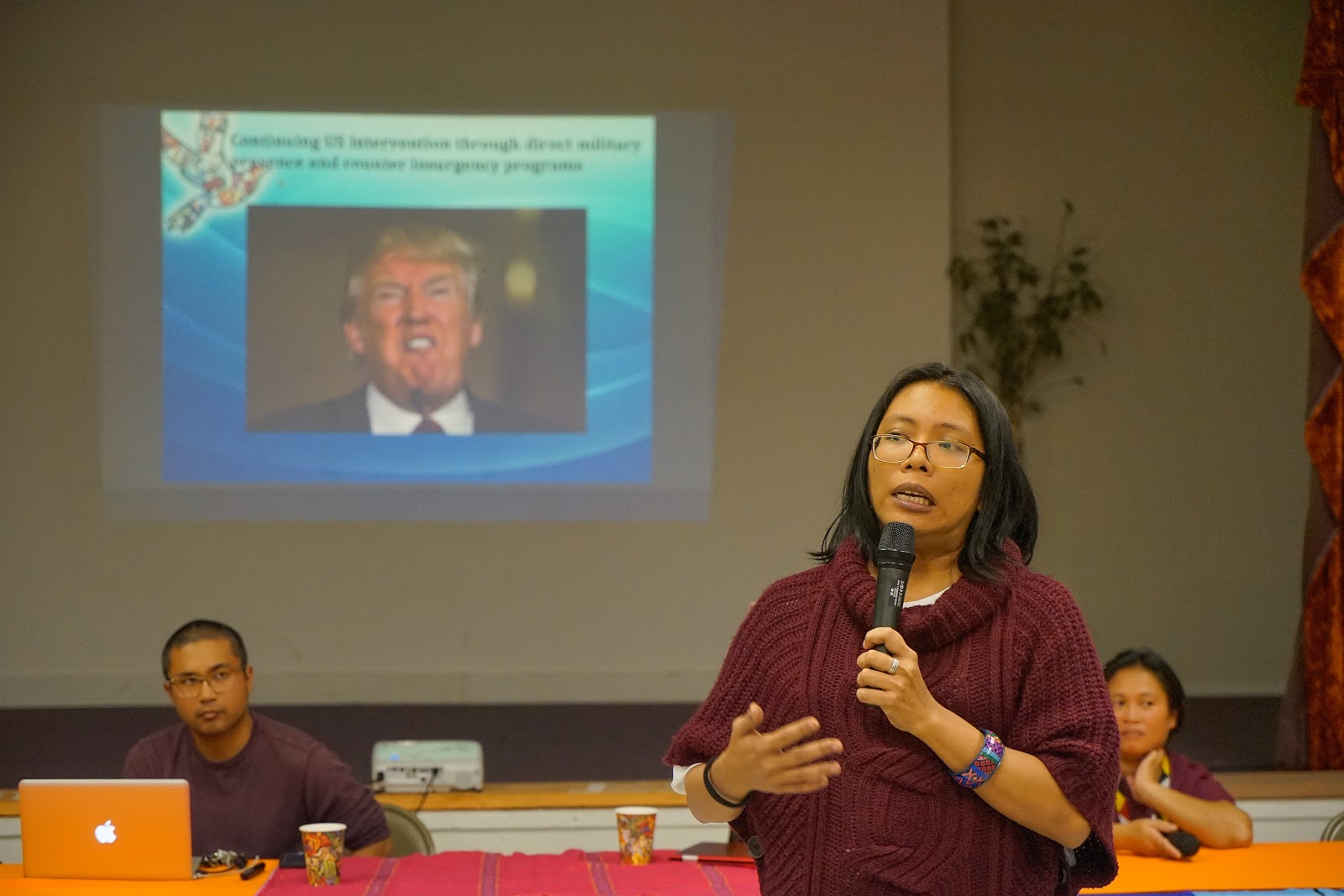 Cristina Palabay, Secretary General of KARAPATAN-Alliance for the Advancement of People’s Rights in the Philippines 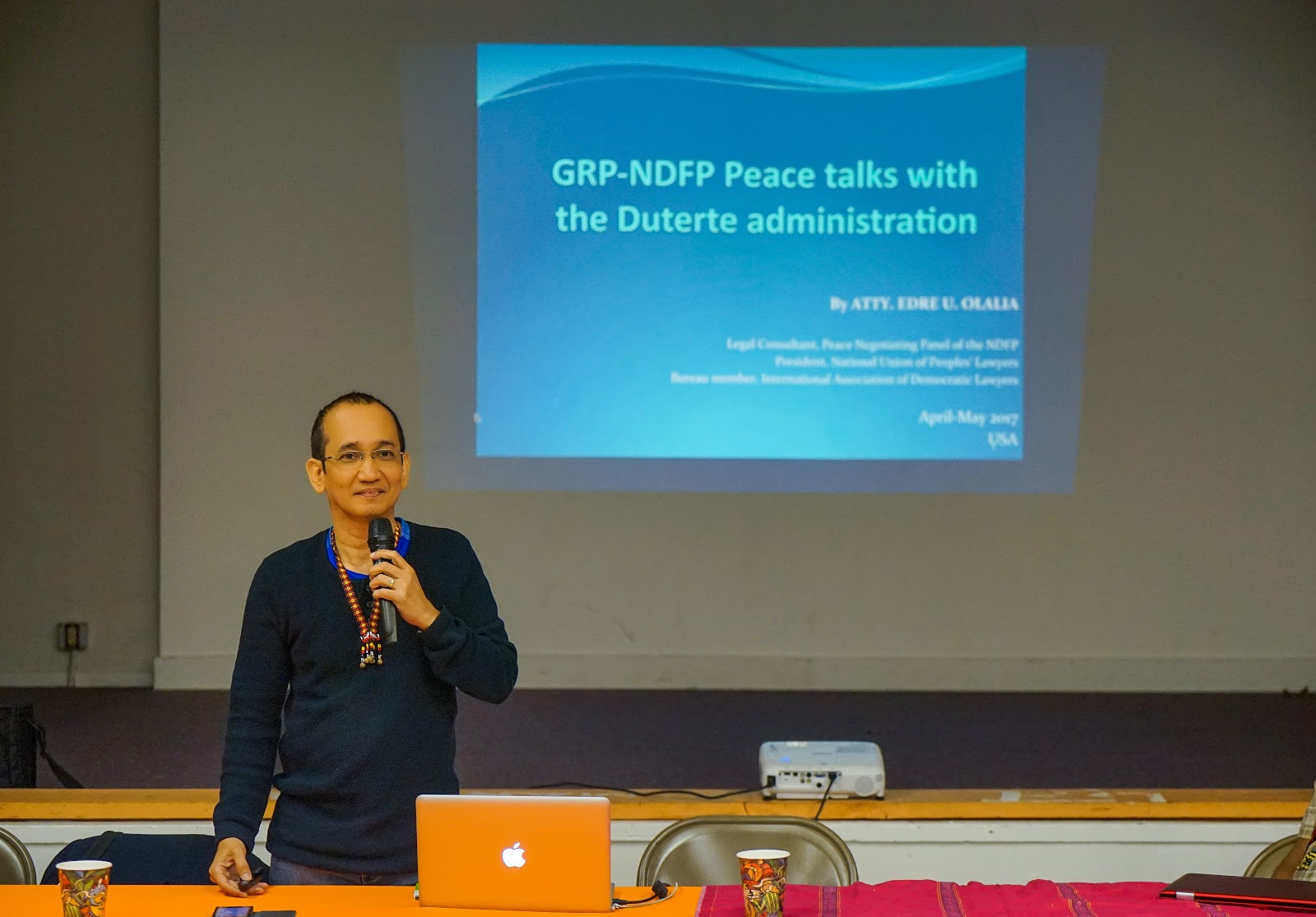 Edre Olalia, Legal Consultant of the Peace Negotiating Panel of NDFP and President of the National Union of Peoples’ Lawyers

The Lumad representatives were followed by speakers who shared the overarching human rights and socioeconomic conditions in the Philippines. Despite “numerous, myriad problems, there are rays of hope, particularly as the Filipino people continue to resist neoliberal policies and the militarization of their communities,” says Tinay Palabay, national secretary general of human rights organization Karapatan. 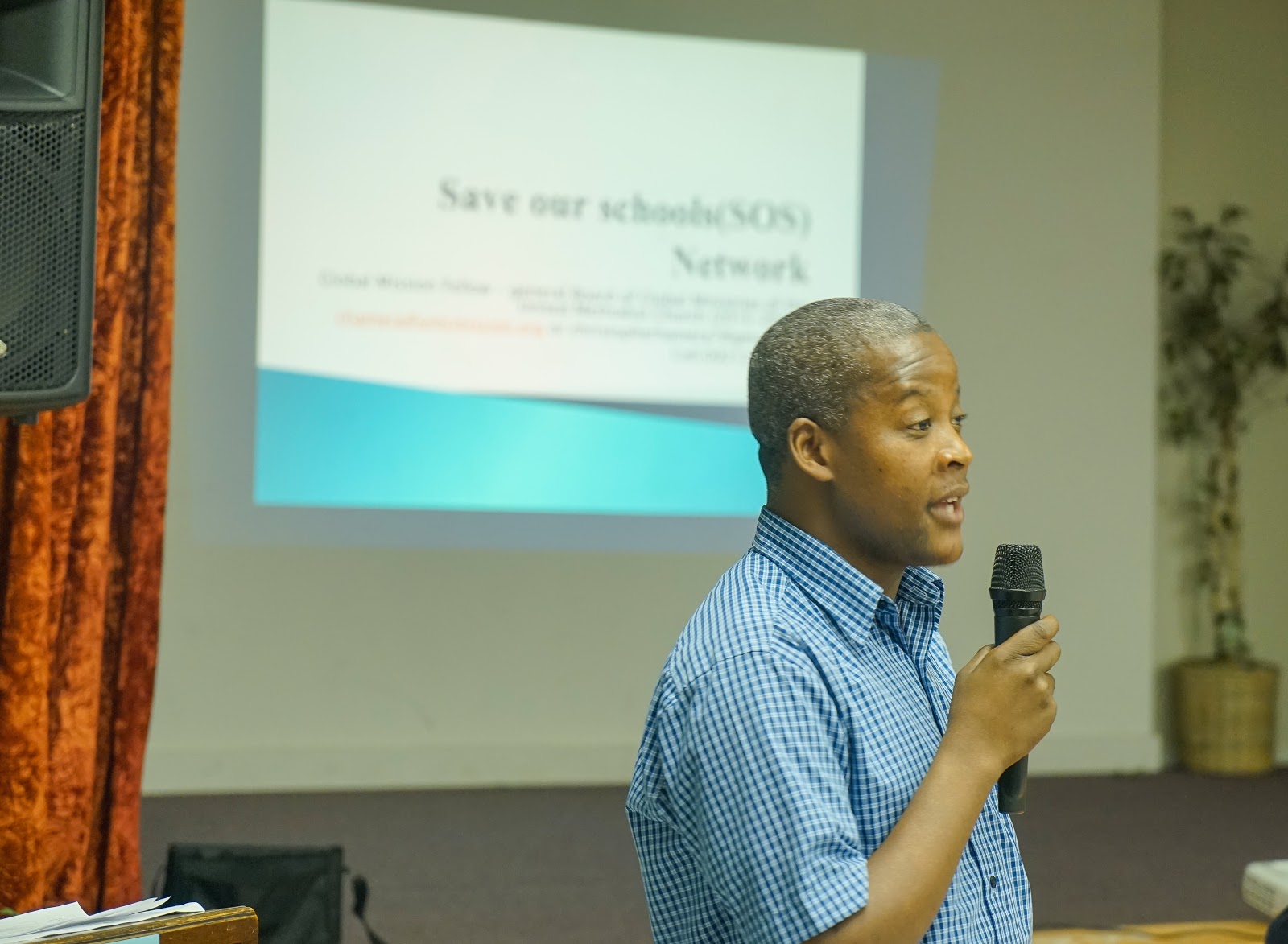 The program ended with an call from Christoper Hamera, a Methodist missionary and Math and English teacher to Lumad children. He reiterated the importance of supporting the development of the Lumad through the Save Our Schools (SOS) Campaign, which sends educators to the Lumad children, especially through alternative schools in their villages. Participants then signed a petition for Rep. Karen Bass (D-34) to support the ongoing peace talks and to reassess the State Department’s foreign military funding policy.

The forum in the Los Angeles region–home to the largest population of Filipino population in the United States–underscores the importance of supporting the peace talks as a way to bring substantive improvements to the lives of everyday Filipinos. Delegates and participants expressed hope that carrying out of socioeconomic and political reforms will bring about a just and lasting peace to the Filipino people who have been fighting for it for close to 40 years. 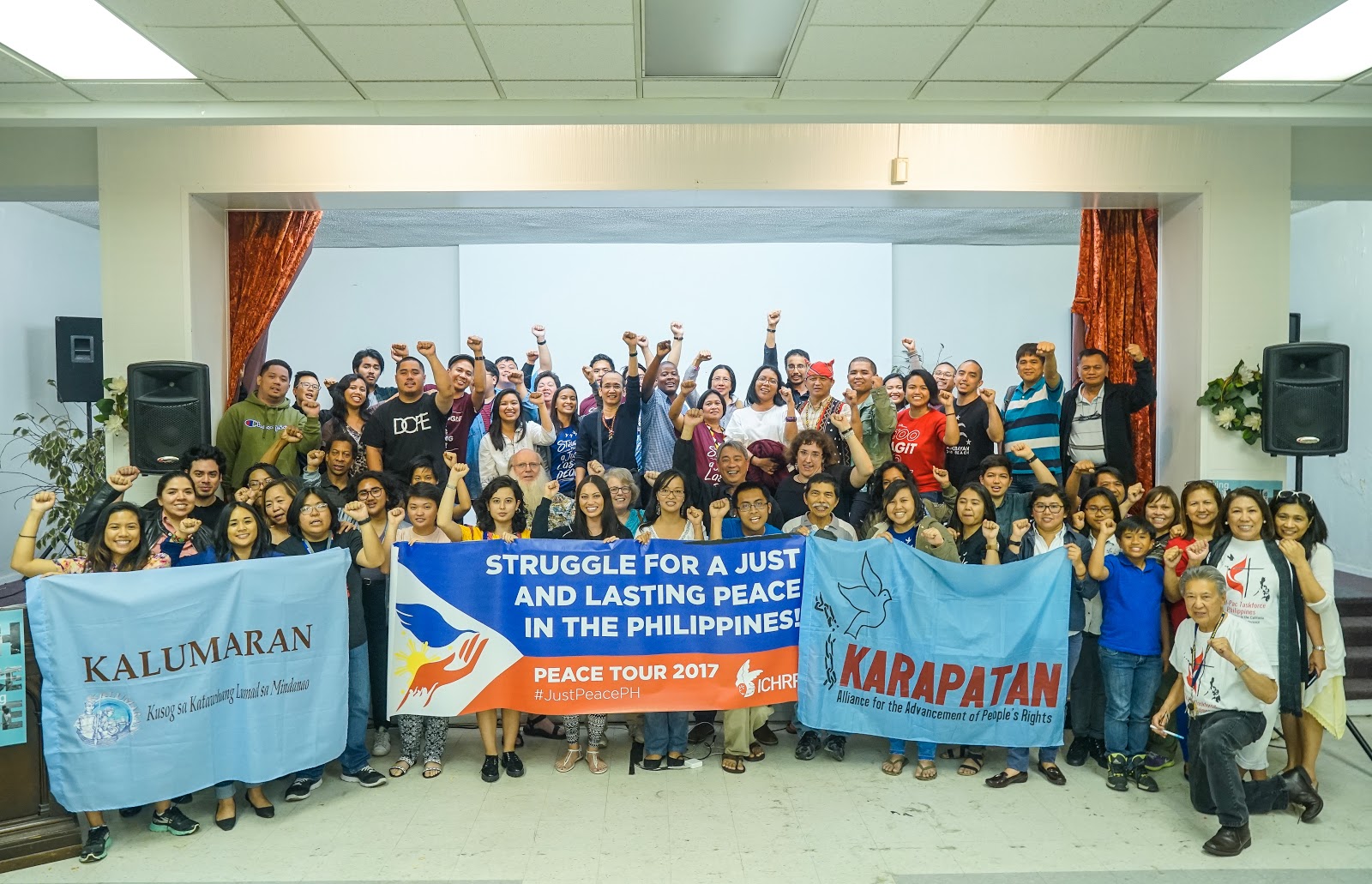 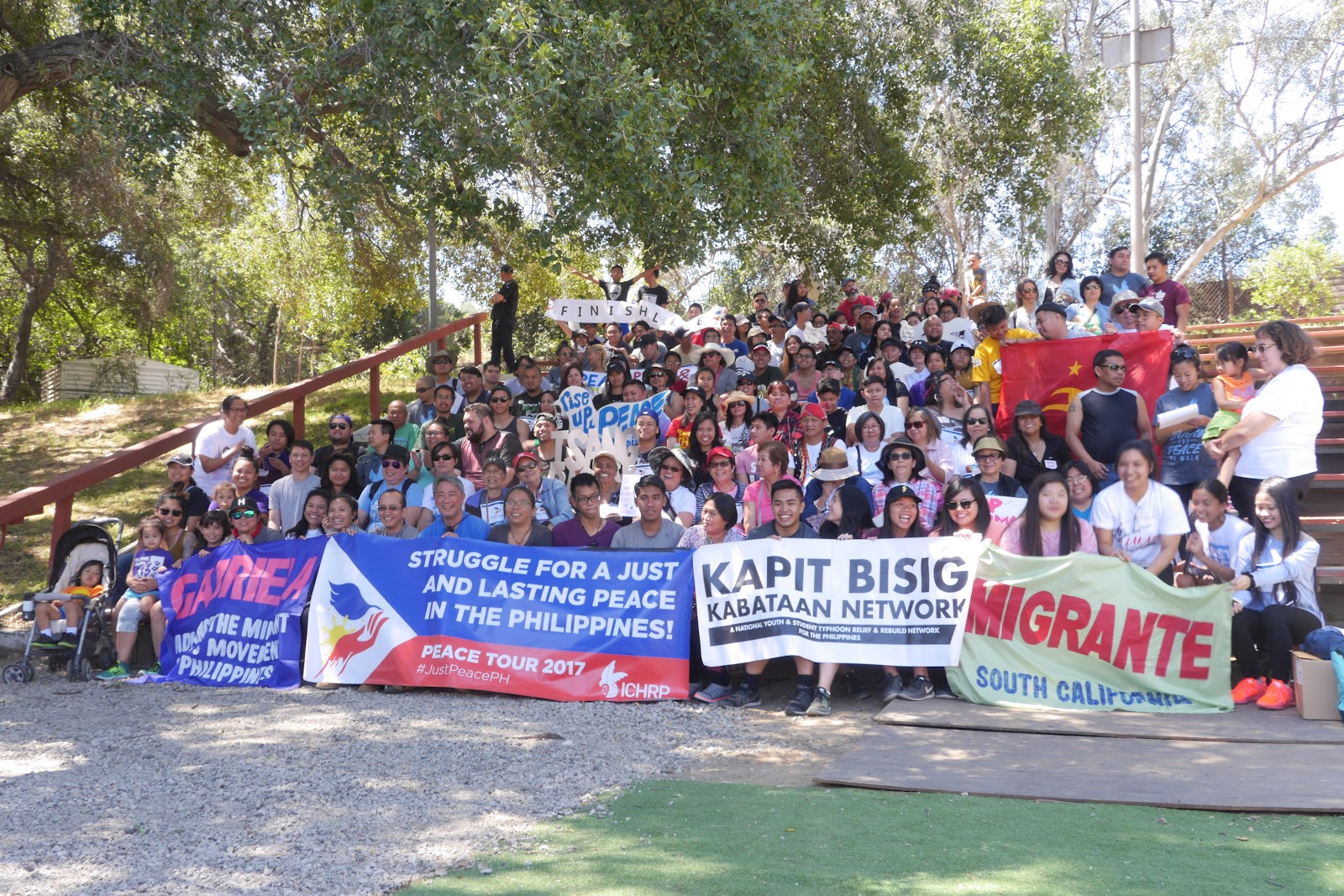 More than 120 participants from all over Southern California joined the peace tour delegates for Lakad 5K 4 Peace.

Los Angeles, CA – On April 29, 2017, more than 120 participants from all over Southern California ran and walked with human rights defenders from the Philippines during Lakad (Walk) 5K for Peace, a fundraiser led by the National Alliance for Filipino Concerns (NAFCON SoCal), Kapit Bisig Kabataan Network (KBKN) and International Coalition for Human Rights in the Philippines (ICHRP). They held the walk-a-thon to promote support for the ongoing peace talks, educate the community on the human rights situation in the Philippines, as well as to gather material support for human rights work and for indigenous schools in the Philippines. The walk-a-thon is the last event in the Southern California leg of the 2017 Just Peace Tour.

The fundraiser, hosted by La Cañada United Methodist Church, was able to raise more than $4,000 that will contribute to human rights work and Lumad schools in the southern Philippine island of Mindanao. Lumad is a term pertaining to non-Muslim, non-Christian indigenous groups in Mindanao. The 18 Lumad groups currently face issues of landgrabbing, environmental destruction and forced evacuation due to the presence of military in their towns.

A short program prior to the walk-a-thon was conducted to highlight the significance of the fundraiser, which coincided with various climate marches across the city. Dulphing Ogan, an indigenous leader from Mindanao, thanked the participants for supporting “the struggle of the Filipino people in the Philippines, and of course, the struggle of the Lumad for self-determination, for our ancestral land, schools, sustainable agriculture, and health program.” He adds, “since the government doesn’t do it, we do it by ourselves with some organizations and institutions who love the environment, indigenous people, and the remaining wealth in our country. They support these programs.” The United Nations has already acknowledged that indigenous peoples are among the first to face the direct consequences of climate change, owing to their close relationship and dependence upon natural resources.

A closing program followed after all the participants crossed the finish line. Tinay Palabay, Secretary General of Karapatan Alliance for the Advance of People’s Rights in Philippines, enjoined the audience in actively engaging in the peace process, saying, “let’s continue supporting the Lumad. Let us continue upholding and talking about human rights on Facebook accounts, in your community. Let’s initiate discussions inside the classroom or even in chat boxes on the peace talks–what is peace? And let’s get involved in other activities as well.” Amidst the Duterte administration’s war on drugs, peace negotiations between the Republic of the Government of the Philippines (GRP) and the National Democratic Front (NDFP) have been taking place to address the 48-year civil war in the Philippines.

Atty. Edre Olalia, legal consultant of the Peace Negotiating Panel of the National Democratic Front of the Philippines (NDFP), is also the lawyer of Mary Jane Veloso, a migrant Filipino mother with a pending death sentence in Indonesia. Atty. Olalia linked the phenomenon of mass migration to poverty and underdevelopment in the Philippines. The NDFP proposals on socioeconomic reforms aim to address fundamental issues in agricultural land reform, building of industries, and social service provisions, among others.

Participants came from all walks of life to support the cause with some participating organizations bringing their own signs. Kevin Parducho, a graduate student from CSU Los Angeles, expressed his support saying, “we want to give a voice to those who don’t have a voice. We want to increase educational access for all,” pertaining to the Lumad schools.

Filipinos and Allies in SoCal Protest Growing US Military Presence in the Philippines, Call Support for GRP-NDFP Peace Talks

Romeo Hebron of BAYAN USA said that the US War Machine, funded by Americans’ tax money, continues to support and train Philippine military that oppresses Filipino Indigenous Peoples, workers, women and youth. In addition to this, he pointed out the new Trump administration’s budget would only be complicit in this growing militarization in the Philippines.  “Amidst the cuts that the Trump administration made to education, health care and other social services, the US is wasting people’s money with its interventionist policies that cause un-peace in countries like the Philippines,” he continued.

The protest underscored the third-year anniversary of the signing of the Enhanced Defense Cooperation Agreement (EDCA) between the Philippines and the United States and supplemented the Visiting Forces Agreement (VFA) between the two governments on April 28, 2014. The EDCA and the VFA, effectively brought the US bases back into the Philippines, a violation of the Philippine Constitution.

Christina Palabay, Secretary General of the Karapatan (Alliance for the Advancement of People’s Rights) called on President Duterte to “walk the talk and decisively terminate the one-sided military agreements with the US, including the EDCA.” Palabay added that if the Duterte government is really serious in asserting Philippine sovereignty against the US, it should start by doing away with treaties and deals that trample on the nation’s sovereignty.

This action was part of the national Peace Tour that was being coordinated by ICHRP to build international support for the GRP-NDFP Peace Talks for a just and lasting peace in the Philippines which brought human rights defenders and indigenous leaders from Mindanao.

Megan Foronda of Gabriela Los Angeles raised the question, “Is there peace in the Philippines when farmers and indigenous peoples are displaced from their lands? Is there peace when the rights of women, children, and LGBTQ rights are violated?” Foronda recalled the murder of Jennifer Laude by US Marine Joseph Scott Pemberton in Olongapo City in 2014.

Cheyenne, a Native American activist from Red Earth Defense, linked Native American issues with Filipino issues and expressed solidarity with the Philippines. “Many of the things happening here in the U.S. are also happening in other parts of the world. The Lumad people’s struggle is our struggle,” she said.

The protest concluded with a rendition of the song Muog na Bato (Stronghold), a song about unity and the advancement of the people’s movement. 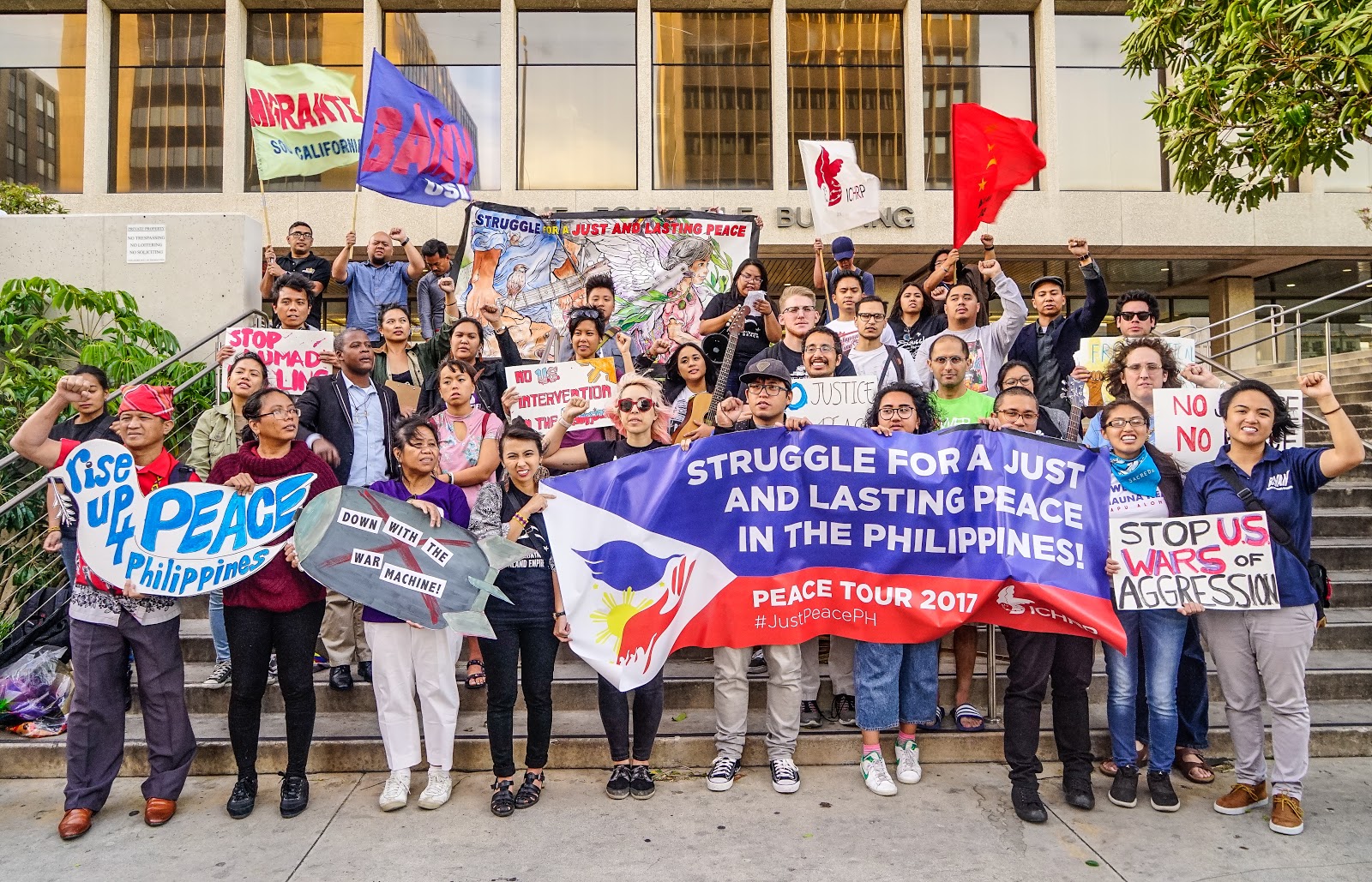 Filipino community members and allies decry U.S. military occupation and call for just and lasting peace in the Philippines.