Press Statement, October 4, 2012 – While the nation watched the festive frolic as traditional politicians and their families filed their certificates of candidacy at the Commission on Elections and, netizens rage over the passing of the Cybercrime Law, extrajudicial killings continue, worsening the climate of impunity in the country.” thus said Cristina Palabay, secretary general of Karapatan, as the human rights group received reports on two cases of extrajudicial killings in the past two days.

In Tarlac, on the month of the observance of the rights and welfare of children, a fourteen-year-old child was felled by a bullet from the arbitrary firing of policemen who reinforced the team out to demolish the houses at   Block 7, San Roque, Tarlac on October 2, 2012. John Khali Lagrimas was hit by a stray bullet that fell on the rooftop of their furniture shop.  He was declared dead on arrival at the Ramos General Hospital in Tarlac City. 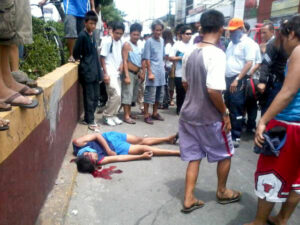 The 100-member demolition team arrived at the site with some 100 policemen, headed by Tarlac City Police Chief Col. Arnel Ramos. They were armed with M16 and 45 caliber pistols. Aside from the police, there were also 8 Special Weapons and Tactics (SWAT) men in full battle gear and two fire trucks.  Around 70 residents, who are members of the San Roque Neighborhood Association, barricaded the place.  The policemen fired their guns while the demolition was on going to intimidate the protesters.

The Block 7 San Roque site is the subject of a land dispute being heard at the Regional Trial Court Branch 63 of Tarlac City.  No court order on the demolition was shown the residents.

Pangalasag is an indigenous peoples’ organization in Opol, Misamis Oriental and a member of Kalumbay, a sub-regional IP alliance in Northern Mindanao. Pangalasag members, the Higaonon tribe of Mindanao Lumads, have been farming coconut, bananas and other crops in their community.  They are opposing the palm oil plantation project of A. Brown Company, a US corporation, which they claim, is grabbing their land.  They have been constantly harassed and threatened by the company guards.  There was also an instance when they were arrested and detained by NBI members on trumped up charges.

Paborada relocated himself in Puntod due to threats to his life although he still went to Bagocboc to lead the community’s campaigns against the palm oil company.

Palabay said that under the Aquino administration, from July 2010 to September 30, 2012, Karapatan has documented 112 victims of extrajudicial killings.

“Many of the victims are rights defenders who uphold their rights to land, ancestral domain, decent housing and livelihood. Instead of going after the perpetrators in the AFP and paramilitary groups, the Aquino administration props up this climate of non-accountability and promotion of impunity,” Palabay concluded. ###