[dropcap2 variation=”blue”]T[/dropcap2]he physical elimination of farmers, workers, journalists, church people, students, teachers, lawyers other activists and human rights defenders is a most heinous and desperate act to try to stop the ever growing people’s resistance against state policies that engender the Filipino people’s poverty, underdevelopment, and foreign plunder of the people’s resources.

Under the regime of Gloria Macapagal-Arroyo (February 2001-June 2010), more than 1,200 persons have become victims of extrajudicial killings (EJKs) or summary executions. No less than UN special rapporteur Prof. Philip Alston, after his visit in February 2007, has clearly indicated the culpability of the Armed Forces of the Philippines (AFP) and other state security forces in the political killings. 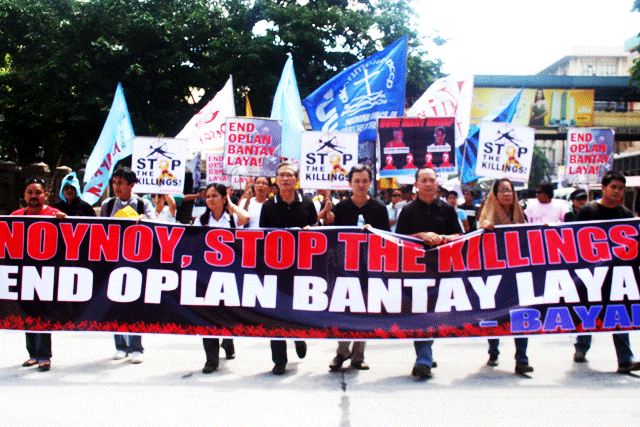 Not a few political analysts had noted the similarities in the framework and method employed in this brutal campaign of killings in the Philippines under the Oplan Bantay Laya (Operation Freedom Watch) and the US’ campaign of genocide in Vietnam during the Vietnam war, infamously known as “Operation Phoenix”. The aims were similar: to dismantle systematically the “political infrastructure” of the national democratic movement by “neutralizing” those perceived to be sympathizers, supporters, unarmed leaders and members of the movement.

It has become common knowledge that everywhere Major General Jovito Palparan has been assigned, a surge of extra-judicial killings ensued (among other human rights violations). This fact has earned him the monicker “the butcher” or “the executioner” among the people. He has been repeatedly implicated in a number of cases filed by relatives of victims, by escaped abduction and torture victim, Raymond Manalo, and even in the government’s very own investigative body, the Melo commission. But apparently for the same reasons, he was even promoted twice and praised for his valiant efforts to crush the government’s “enemies” by no less than his commander-in-chief, Macapagal-Arroyo herself.

“While an important informal message was clearly sent to the military, most of the Governments’s formal actions in response to the Special Rapporteur’s recommendations have been symbolic, and lack the substantive and preventive dimensions necessary to end the culture of impunity.”

[pullquote align=”left” variation=”blue”]Since 2007, the Government has successfully prosecuted just one perpetrator of an extrajudicial execution. And not a single member of the armed forces has been convicted for killing leftist activists.[/pullquote]

Worse, the killings have continued under the new government of President Benigno Aquino III. The killings proceed from the mandate of the extended OBL II (until December 2010) and further on with the reformulated counterinsurgency program dubbed as Oplan Bayanihan. Oplan Bayanihan, in spite of its supposed commitment to “peace and development”, is proving to be as brutal as the previous failed operation plans.

A very recent case is the assassination of Fr. Fausto “Pops” Tentorio, an Italian missionary based in Mindanao (Southern Philippines). He was a vocal critic of militarization thus getting the ire of the military. He was an avid supporter of Lumad (indigenous people) alternative literacy, numeracy and primary schools branded as communist schools by the military. He spoke strongly against the entry of multinational mining corporations in the province and joined the campaign that prevented destructive mining in the area.

We strongly demand for a stop to the political killings, unmask the assassins, hail them to court for prosecution and punishment, including their political and military handlers.

Extrajudicial killing (EJK) is the act of unlawful and deliberate killing carried out without due process and outside of the judicial process by state agents or with their complicity, inducement, tolerance or acquiescence. With it are also classified summary execution, arbitrary killing, assassination and massacre. 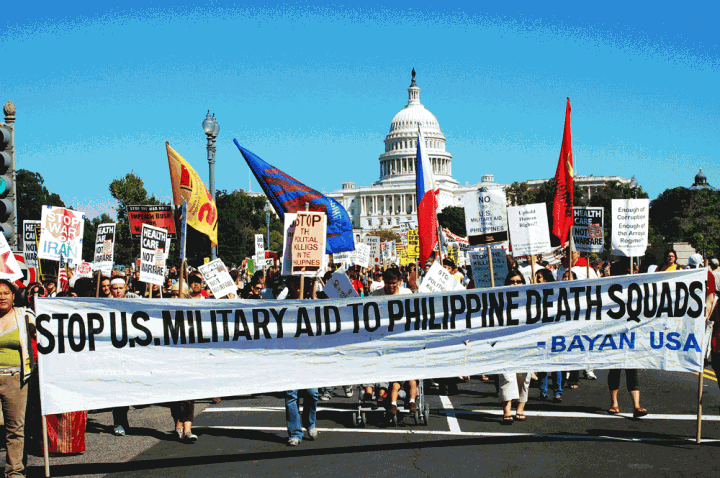