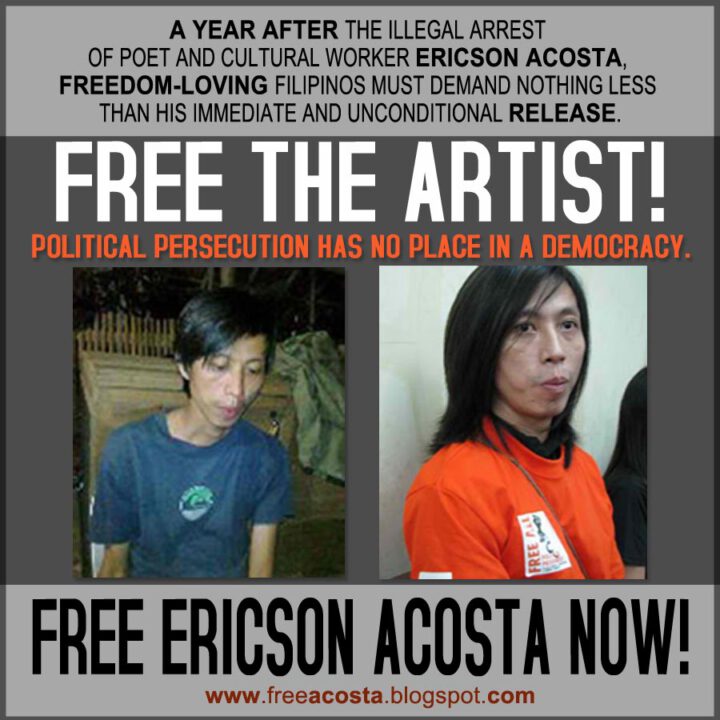 A year after the illegal arrest of poet and former UP Collegian editor Ericson Acosta, his family, colleagues, human rights advocates and supporters “demand nothing less than his immediate and unconditional release.”

“Ericson’s sense of responsibility as Iskolar ng Bayan has led him to work in the grassroots and create art with the people.  (His) right to participate productively as a free citizen of this country is violated each day he remains in detention,” read a statement released by the Free Ericson Acosta Campaign (FEAC) in a press conference and music jam at the University of the Philippines Palma Hall lobby last Friday, February 10.

“The illegal arrest and continued unjust detention of cultural worker Ericson Acosta is concrete proof of the existence of political prisoners. There is nothing righteous with having our artists like Acosta suffer in incarceration,” Samahan ng Ex-Detainees Laban sa Detensyon at Aresto (SELDA) Secretary-General Angie Ipong said in a news release.

Acosta was arrested without warrant by the military on February 13, 2011, in Brgy. Bay-ang, San Jorge, Samar just because the laptop he carried roused the suspicion of soldiers. Due to serious irregularities and rights abuses in the conduct of his arrest, his counsel led by Atty. Jun Oliva of the National Union of Peoples’ Lawyers (NUPL), filed a Petition for Review before the DOJ in September 2011, and moved to defer court proceedings pending resolution of the said petition. Ideally, a review petition should be resolved within 60 days.

“It is important for us to bear witness to the truth of the injustice done to Acosta,” Prof. E. San Juan, Jr. said.

Exactly a year after Acosta’s illegal arrest, the NUPL will today file a motion for the immediate resolution of the Review Petition. Aside from difficulties faced by his family after Acosta’s detention in Samar, they also protest continued military harassment and intimidation by troopers from the 8th ID deployed within the jail facility.

“Instead of settling for a stable, well-paying job, or going abroad like his brothers, our son Ericson chose to teach literacy and work for the oppressed in far-flung provinces. Something is terribly wrong when he is made to suffer a year in prison for doing what he thinks is right,” lamented Acosta’s father Isaias, who is now in his late ‘70s.

Acosta was named finalist of the 2011 Imprisoned Artist Prize at the Freedom to Create Awards Festival in Cape Town South Africa last November, along with imprisoned artists from Burma and Tibet. Various human rights groups and cultural institutions, including the Amnesty International, Campaign for Human Rights in the Philippines-United Kingdom, University Council of UP Diliman, National Commission for Culture and the Arts (NCCA) and the Philippine Center of the International PEN (Poets, Essayists, Novelists) support the call for his release.

“Even if it has become dangerous to integrate with the masses, the scholars of the nation know it has to be done,” Dean Roland Tolentino said in his speech at the UP.